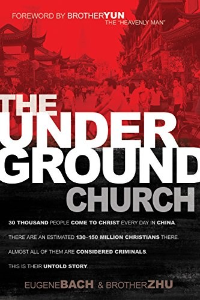 Arrested for proclaiming Jesus
When Pastor Shen Xiaoming was finally arrested, an elated police chief happily declared to him: 'It took me so many years to find you. This time, there will be no turning back. You will surely die in the detention prison.' His only crime all along, was proclaiming the Gospel.
Governments opposed to the Gospel
When the Chinese government learned that Fangcheng was the center of a nationwide gospel movement in 1983, it ordered the arrest of all Christians there, and sentenced over a dozen to death. But this action only made God's people more fearless and resolute.
Strengthening and encouraging new disciples
The Five Brothers ( who are influential leaders of the church in China), came up with the Cassette Bible School idea that entailed recording sermons for teaching and encouraging their brethren. With the same aim in mind, they later started a radio broadcast by and for the House Churches.
Demons cast out in Jesus' name
The Yinshang County moved from being a village ravaged by demonic oppression to one where virtually all its people became free in Christ, as they wholeheartedly embraced Christianity. And this freedom came when the Christians in Yinshang went about casting out demons in the Name of Jesus.
There is healing in the name of Jesus
Pastor Chen came from a family with a history of cancer and deafness - his grandfather and father both died deaf and with cancer. Before long, he too was going completely deaf and frequently falling ill. But on the very day he accepted Jesus, he became a new creature, not just in his spirit and soul but also in his body - completely, he was healed.
God gave signs and wonders through the apostles
Brother En had lost hope in living. It was at this time that he received a Bible from Pastor Chen. He read it, believed God for his healing, and received healing. His family was astonished by his instant healing and they became Christians too.
Prayer of faith for the sick
Enguan's father passed away due to illness. His mother and brother were also sick, but the entire family couldn't afford to see a doctor. This taught him to have faith in God. He travels around healing people and releasing them from demon possession with this faith in Jesus, no schooling, no money, and no Bible.
Authorities forbid speaking to people about Jesus
When the Police in Wenzhou discovered that children were being taught about Jesus at Pastor Philip's church, they forbade it - declaring that under no circumstance will such teaching be allowed.
Paul has a vision of a Macedonian man pleading for the Gospel
Some Chinese in the underground church, desiring to be missionaries, are having visions of specific people in specific countries speaking specific languages.
Gift of speaking to someone in their language
The Chinese underground church is experiencing great revival, which is resulting in a great missionary movement. Some are reported having had visions like Paul's Macedonian call (see Acts 16:9–10), in which they instantaneously started speaking the language of the nation calling them.
Holy Spirit guides with specific names or details
The Holy Spirit specifically instructs a young man to go to preach the gospel in Palestine, where it was also revealed to him; will be his place of martyrdom.
There are no gender distinctions in Christ
The Lord is using mightily, to propagate his gospel in the largest revival in history; women evangelists and missionaries. These women, with no regard for the spotlight, are all about doing their Master's bidding alone.