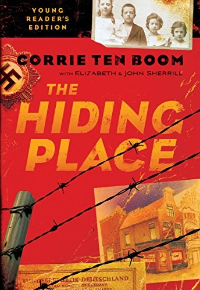 God using a vision to communicate
Corrie ten Boom has a vision, like a waking dream, of her family and friends being taken away somewhere. She was afraid, but her sister Betsie comforted her saying that if God has given her a premonition, it shows He has that too in His hands.
Christians share in the suffering of Christ
One Friday morning as they lined up for the humiliating "medical inspection" at the Ravensbrück concentration camp, Corrie and Bestie were reminded as they stood in the brutal cold, of the sufferings of Jesus the day he hung totally naked on the cross to save mankind.
God brings comfort and peace to the persecuted
The inhumane conditions that characterized the Ravensbrück camp notwithstanding, Corrie Ten Boom and her Sister, Bestie Boom found in Christ and in His word, an anchor to hold unto. Not tribulation or persecution could separate them from His love; in Him they were more than conquerors.
God multiplies resources so that there is enough for everyone
A small vitamin bottle continually produced drops for those in need, Corrie Ten Boom found it hard to believe. Her sister Betsie compared it to the story of the widow of Zarephath whose oil never ran dry while she fed Elijah. Betsie described it as a "surprise from a Father who loves you.”
Love your enemies and pray for them
Corrie ten Boom discovers that forgiving her enemies is not only hard, but it is impossible without God's intervention. She prays for help and experiences His supernatural love and forgiveness for her former enemy.