Tramp For The Lord 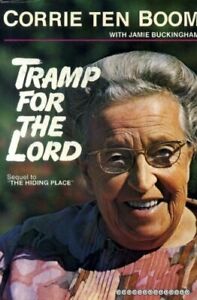 Don't be anxious, instead make requests known to God
Corrie Ten Boom was staying in New York at a YWCA that only allowed rooms to be rented for one week. At the end of the week, the receptionist informed Corrie that her time was up and asked for her forwarding address. Although she knew no one in the city and had nowhere to go, Corrie was not worried since she trusted God. Then the Lord miraculously provided a place to stay, in such a way that the hotel receptionist could see God's lovingkindness.
Forgive, or you will not be forgiven
Corrie ten Boom helps a man overcome bitterness and unforgiveness by sharing her own, similar experience, and how Jesus delivered her.
Putting on the whole armor of God
Corrie ten Boom puts on the whole armor of God to stand against her ground against bitterness, fear, and resentment.
Forgive your persecutor
Corrie ten Boom is faced with the most difficult obedience of her life, to forgive the cruel concentration camp guard who tormented her and her sister. Jesus did a miracle in her.
Do good to those who hate you
Thomas chose to "do good to those who hate you," at great expense to himself, and won his neighbor to Christ.
Forgive your persecutor
Corrie ten Boom helps an African death row inmate find peace through the power of Jesus to forgive his enemies.
The sheep know and hear His voice
God told Corrie ten Boom to go to Argentina for meetings, though she did not know any details. When she arrived, no one was there to meet her, nor could she speak the language. Meanwhile God told a Dutch pastor in Argentina to stop by the airport and look for her.
Killed for the sake of Christ
In an African country, the State was sponsoring the killing of believers. But these believers, "having met a martyr's death, have thus received a martyr's crown."
Christians share in the suffering of Christ
Tante Corrie was to speak to believers in an African country where a State sponsored religious cleansing of Christians was taking place. To this terrified believers she brought God's word on the joys of sharing in Christ's suffering, bringing hope to a congregation facing martyrdom.
There is healing in the name of Jesus
Corrie ten Boom laid hands on a leprous woman and declared her healed, in Jesus' Name. Years pass by and the same woman meets Corrie ten Boom again, but this time, she was completely whole - fully free from leprosy.
Holy Spirit renewal for the repentant
Corrie Ten Boom is convicted about her falling off and turning away from her first love - Christ. Here she describes the great joy and renewed strength she obtained upon confessing her sins and seeking God's forgiveness.
We have fellowship with one another if we walk in the light
Conny learns that to truly walk together in the light, the Lord expects that she be honest with Corrie Ten Boom. In spite of Corrie's maturity and long walk with Jesus, Conny must correct her in love when need be.