The Jubilee Story of the China Inland Mission 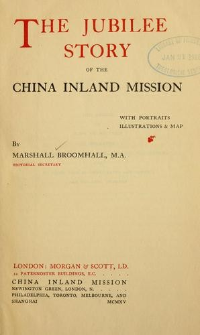 Enter into the joys and sorrows of one another
After the Rudlands lost a child, Mrs. Taylor, in a beautiful display of the kind empathy that is characteristic of every true believer, wrote to share in the loss and to bring comfort to the bereaved mother.
God will never leave nor forsake us
In just a year, Mr. Taylor lost two children and his dearly loved wife, but as unimaginable as this tragedy must have been for him, Mr. Taylor writes about the reassuring comfort the presence of God brought him throughout that period.
God's work will not lack God's supply
When the need to build a Girls School became apparent to him, Hudson Taylor told no one about it. Because God was his Partner and Intercessor, he made his requests known to God and like only He does; he provided for His own work!
God's work will not lack God's supply
As they gathered to pray on May 24, 1875, Hudson Taylor reminded his friends to ask that the Lord provides for his work as they had not enough to meet the needs of the work. They did and that same day, help arrived!
Don't be anxious, instead make requests known to God
A few days to the departure of a party of young missionaries from Marseilles, there was still no money to fund their trip to China. But as this need was made an item of prayer, the Lord who answers prayer heard and intervened; bringing a much needed encouragement to His people as a result.
The righteous innately have God's heart toward those in needIt is the heart of Jesus to show compassion to the needy
When in 1877, a famine of unprecedented levels struck China, strenuous efforts were made by God's people across denominational lines to provide relief for the country's people; many of whom were dying daily in their hundreds. God's people put their life on the line, notwithstanding the initial opposition from the government with some paying the ultimate price.
God's work will not lack God's supply
The China Inland Mission needed plentiful supply to meet its mounting obligations, and yet the funds were not forthcoming. But instead of despairing, the turned to God in prayers and the ever faithful God stepped in to provide supply for His work.
God answers prayer
In a remarkable answer to the definite prayers of missionaries in China, 70 missionaries were added as reinforcement to add to the China Inland Mission's workforce in China, and this number was added within the time-frame God's people wanted. And not only that, the mission's income also grew to support this additional number!