Faith And Facts, As Illustrated in the History of the China Inland Mission 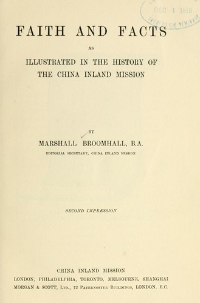 God will provide for our daily needs
Having loaned his all to the Lord by giving to a poor family, Hudson Taylor was blessed to receive from the Lord in his own time of need. And the experience stayed with him forever!
God will never leave nor forsake us
For Hudson Taylor, the many trials and embarrassments he suffered as a young Missionary pioneer in China only helped him prove the promise, "I will not fail thee, nor forsake thee.'
God's work will not lack God's supply
Only by handing over his burden about co-labourers and their sustenance to the Almighty, did Hudson Taylor—whose health was starting to be affected by this burden—find not just the sleep that for weeks eluded him, but also lasting rest for his troubled soul.
Spiritual burden for a lost people group to be saved
In a most passionate and animated appeal, that reveal the extent of his burden for the unsaved, a young missionary pioneer to Inland China, writes believers in his home country, challenging them to pray, to offer their resources, and most importantly, to offer themselves that these millions, may get to know the only Name by which men must be saved!
Ask Me anything in My name
Not even the trying times they were going through was enough to deter Christians of the China Inland Mission from demanding more from an ever faithful God. They needed more workers, and so they simply prayed! And God answered; providing not just the workers but the means for their sustenance too.
God's work will not lack God's supply
Missionary candidates were due for sending out to China, but there was no means to do so. This matter was made a subject of prayer, and yet again, it was proved that "God's work will not lack God's supply!"
God will provide for our daily needs
Mr. Duncan had exhausted all of his supply, and was told at breakfast by his help, that there was nothing to make dinner with. But Mr. Duncan's faith was in the God who promised to provide our daily needs. And he was not put to shame for help came; from a quite unlikely source!
God's work will not lack God's supply
In a time of dire need, Dr. A. W. Douthwaite, was made a tempting offer that if taken, will solve his financial problems but have him leave his work as a medical missionary. But supported by his wife, Dr. Douthwaite chose to trust in God for his family's needs; and that same day, the Lord sent help from various sources.
Body of Christ is made up of many members
Mr. G. Stott, undeterred by his physical disability—the loss of one leg early on in life—committed over 23 years of his life, until his death; pioneering and preaching the gospel in Chekiang, enduring many hardships but always comforted by the loving presence of his God.
Give and it shall be given unto you
Marshall Broomhall writes about a poor widow, who though dependent on the goodwill of others, made it her duty to give in support of the China Inland Mission at several times. Filled with a generous Spirit, out of the little she had and received, she gave to support God's work.
Giving all one has to live on, and trusting God for provision
Moved by a story she read of the famine in China, a poor widow gave out her all to support the victims, without knowing where help will come from for her. But the God in whom she trusted was faithful to provide for her soon afterwards!
Believers are the aroma of Christ to those around them
When the story of a widow's generosity was read by Mr. Broomhall at a breakfast meeting with some wealthy believers, they were challenged to do more for God. So they gave liberally, like the widow whose story they had listened to.