Women Who Risk, Secret Agents for Jesus in the Muslim World

by Tom and Joann Doyle 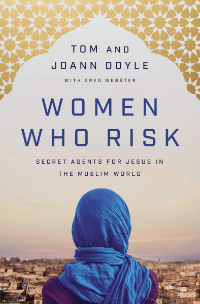 Demons cast out in Jesus' name
Nori was being troubled by demonic spirits, and as a result, she was literally losing her mind. When she chanced upon the Heshwas one day, she was in the name of Jesus, delivered from her affliction!
A workman of God handles the Word correctly
Nori, who wanted to preach the gospel knew that Bible studies and prayers were important ingredients in achieving that God-given task and so vociferously, she poured over scriptural texts and prayed daily until at last, she felt ready to begin walking her talk!
Believers will suffer terrible things for the sake of Jesus' name
When Nasreen Kahn heard that her daughter had become a Christian, she could not take it, so resorting to verbal and physical abuse, she hurled insults daily on her daughter who would in return get back to her room, pray and forgive her mother.
Jesus will never send away those who come to Him
After months of keeping it a secret, Abdul Hadad who had led a very terrible and ungodly life, finally opens up to his wife about the unbelievable forgiveness had had mercifully received for and his newfound faith in Jesus Christ who forgave his terrible sins.
True disciples love Jesus more than even their own lives
Even the knowledge of the fact that Muslim fanatics were after her and monitoring her movement did not stop Dina from courageously witnessing about Jesus to other women. Not even the possibility of death could deter her, there were souls to be won and she was committed to winning them!
Transforming power of forgiveness
Tom and Joann Doyle interviewed the Hadads who had a loveless and tumultuous marriage before giving their lives to Jesus. Since surrendering to Jesus, theirs became one excellent example of the transforming power of forgiveness!
Willing to die for faith in Christ
Having received help and grace to overcome the hatred and bitterness that characterized their marriage as unbelievers, Dina and Mohammad, now Christians, are committed to Christ above all else. For the couple, death holds no power; infact they expect to be martyred for their faith in Jesus Christ.