When the Spirit’s Fire Swept Korea 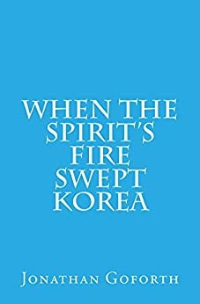 All great movements of God are birthed in prayerBelievers praying together for many days
Inspired by the story of the revival at Kassia Hills, India, missionaries from different denominations gathered together to pray for the same move of the Spirit to happen in Ping Yang. And for four months they continued to pray to God after which a first but most important result became obvious - they were United in Christ.
Holy Spirit convicts people of their sin
An elder was convicted to confess the sin of theft from his friend's widow on the 8th day of a weeklong prayer-meeting, opening the way for the long expected mighty move of the Spirit. Following him, many more glorified God by confessing their sins.
Restitution is practical evidence of true repentance
Story after story reveal the effect of the Spirit’s revival on the Ping Yang church. Not only did previously hidden sins get confessed openly but restitution; a true mark of genuine repentance, was seen taking place—ill-gotten wealth was willingly sold and the proceeds returned to the rightful owners.
All great movements of God are birthed in prayer
Believers in Tai Ku gathered like the early church did to pray for ten days, seeking revival and on the seventh day, the Holy Spirit flooded their meeting causing a year on year increase in membership for three straight years with churches springing up even where there was no evangelist or missionary.
Holy Spirit convicts people of their sin
As two missionaries gathered to pray on the opening day of the Ping Yang High School, the Holy ghost moved to mightily convict the students and caused them to confess their sins. Even a native pastor who had attempted to block the Spirit's move was himself brought under conviction and he confessed his sins.
People begging to hear more of the Good News
550 women from around Ping Yang assembled eagerly to learn God's ways through Bible Study. Zealously, they paid their bills with some walking up to five days just to join the class.
Jesus commands His disciples to go and make more disciples
Reporting about the revival in Ping Yang, two evangelists from Manchuria found that the people had become 'walking chapels' as the preached the gospel wherever they went. Traders were doing same and one even pioneered a christian community, even students were not left out; they went about telling men daily about Jesus.
Communities of believers sharing in needs
When an opportunity came to get a permanent site for a poor Korean church, the women sold not only their jewelry but also their valued kitchen utensils to raise the needed amount. They went even further in their giving, and committed money to sending out a woman evangelist to the heathen around them.
Communities of believers sharing in needs
When at the dedication of a church, it was found that the church still owed $50, a poor member stood up and offered to repay the loan - he sold his only mule, for he “couldn't bear to have the Church of Jesus Christ owing a $50 debt to a heathen.”
Blessed are those who are persecuted
North Korean Christians in the early 20th century rejoiced to share in Christ's persecutions. Story after wonderful story tell of the fruit.