The New Acts of the Apostles 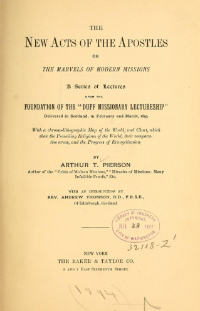 Jesus taught with authority
Kho-thah-byu, poor man and slave, who received Jesus and became an Evangelist to his people - the Karens, labouring tirelessly among them. "His preaching carried with it conviction, and compelled others to say, 'Truly this is the word of God.'"
Salvation transforms
One Bible and a prayer-book was all that was rescued when a bloody conflict broke out among the men of Pitcairn island. Through that Bible alone, John Adams—a reckless, godless mutineer and the lone male survivor—not only became a Christian, but led many others to Jesus.
There is salvation in no other name
When Mikani saw the charm he had complete trust in, fail to protect someone who had it from death, he finally realized that; the name of Jesus Christ, is only the only Name by which men must be saved.
Holy Spirit convicts people of their sinSalvation transformsGodly grief produces repentance that leads to salvationLarge groups of people converted at the same time
Titus Coan depended only on God's Spirit to bring home the words whenever he preached. And the Gospel he declared wrought changes in the hearts and lives of those who listened; sins were confessed, quarrels reconciled, idolatry renounced and God's cause; greatly advanced.
Give to everyone who asks
When Henry Richards—who was working among the poor and beggarly people of the Congo—came across Luke 6:37 which said to "give to the one who asks", he struggled to accept that it was to be taken literally. But after becoming convinced, he went on to not only preach, but to practice this command too and the impact this had in the life of the people was amazing.
Holy Spirit falls on those hearing the WordSalvation transforms
As the Holy Spirit fell among the Banza Man-teke people, a great and truly spiritual awakening was experienced. Even as the years went by, the results remained with a transformation that was evident in the day to day life of the people.
Killed for the sake of Christ
For no other reason but their precious faith in Jesus Christ, the King of Uganda subjected a group of young Christians to the most brutal and cruel death possible. But these disciples, with praise and thanksgiving amidst pain, accepting their fate—they died—proud martyrs for Christ.
Believers will suffer terrible things for the sake of Jesus' name
When forty kids of Captain Janes' school in Higo, Japan pledged themselves to Jesus in 1876, their actions were met with resistance by their parents who threatened suicide, but this wave of emotional blackmail by their parents as well as the terrible persecution and threats they were made to face did not deter these young ones—they stood firm!
Governments opposed to the Gospel
Uganda's government, led by a treacherous King opposed the Gospel and ordered that Christians be viciously put to death. But these young believers, accepted martyrdom with prayer and praise!
Ask Me anything in My name
In a remarkable and definite answer to the prayers of Hudson Taylor and a few other Christians aboard a ship, God sent a much needed and timely wind to help redirect their course; for a four-knot current had them drifting helplessly toward some sunken reefs—much to the dismay of the cannibals at shore—who were already lighting fires in anticipation of the preys they were soon to catch.
God answers prayer
A believer refused to contribute any money to a fund that was to be used for an idolatrous work aimed at protecting the houses on his street from an imminent fire disaster. He chose instead, to pray to God for deliverance and so it was for him; for even as the fires raged; consuming his next neighbour's, his house was miraculously spared by the God to whom he prayed!
God answers prayer
As the village of Nowar was being approached by an armed group of murderous savages, but as the people offered prayers to God in their panic-stricken state, He heard and sent help!
Deliverance from enemies and circumstances
Surrounded by savages, the mission house had fire set on it by these murderers who still wanted to kill John Paton as he ran out of the mission-house. But before they could carry out their evil plan, a sudden mighty and roaring tornado—from Jehovah Himself—brought an avalanche of rain that not only chased away these savages, but also put out the fire and delivered God's servant.
Christians take care of their enemy's needs
When a famine struck China, God's people took the opportunity presented the same people who loathed them—the selflessness of the Christian Spirit and by so doing were enabled to win many souls to Christ.
Protest against those unwilling to hear the Gospel
Titus Coan and a group of Christians were in Puna to preach and there they met a people so stuck in their own ways and so uninterested in the gospel that they deprived God's servants of not just their hearts but even the food to eat. In protest the next day, Mr. Coan shook the dust of their land of his foot and departed. It wasn't long before God's judgement was visited upon the people there.