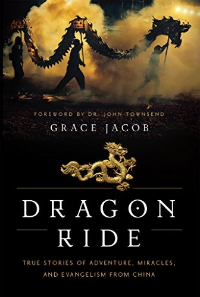 God using an inner voice to communicate
Grace Jacob was doing her laundry when she suddenly felt God's presence and a need to urgently call Maggie. Hurriedly she sped off in obedience. Her call to Maggie at that very moment turned out to be crucial in saving the life of Maggie's son, Jeff.
Governments opposed to the Gospel
Peter, a Chinese college student was made to fail all his final year courses, forced out of school and made to look like a voluntary school drop-out. He was warned by the police never to disclose the real reason he was kicked out; which was Peter's newfound faith. He had become a Christian in college.
God answers prayer
Grace Jacob's English classes with a group of atheist students was being spied on. But as Grace cried to God for help, He responded in the most remarkable way; blinding the spies but at the same time opening the eyes of the students to the message of salvation.
God blinds the eyes of adversaries
Grace Jacob was teaching a group of atheist students, but her class was also attended by two spies who were there to make sure the students didn't learn about God. Grace prayed that God would blind the eyes and ears of the spies, but He did something even more amazing.
Salvation transforms
Rachael's life was a complete mess; she was atheist, suicidal and nursed plans to walk away from her family - her husband and their only son. Life for her had no meaning, until she accepted Christ - the smallest things were now charged with meaning - for His salvation had wrought in her a great transformation.
God bestows gifts and healing through the laying on of hands
Grace Jacob was diagnosed with a urinary tract infection, and after getting no respite despite two courses of antibiotics (that turned out to be wrong treatments), the doctor said nothing else could be done. But when the elders at an international fellowship gathered around to pray and lay hands on her, Grace was miraculously healed.
Signs and wonders draw attention to Gospel message
After Doris fell very ill, Grace saw it as an opportunity to finally rouse the interest of her friend in God and hopefully have her drawn to Him, so she began to pray fervently that her friend be healed. And as Doris got healed she became curious to understand the message of God and His forgiveness.
Holy Spirit guides with specific names or details
God led Grace Jacob supernaturally to the home of her suicidal friend, just in time to prevent disaster.
Salvation transforms
When Lacey called her Dad to inform him that she had become a Christian, he was skeptical and derisive, however, her changed attitude convinced him!
Disciples are devoted to Christ above anything or anyone
When Jane shared her newfound Christian faith to the people of her village her parents were persecuted and threatened to be ostracized for such a faith.