Meet Me at the Olive Tree, Stories of Jews and Arabs Reconciled to the Messiah 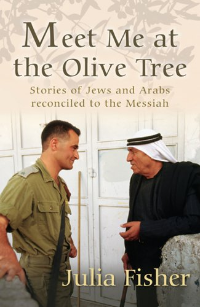 God bestows gifts and healing through the laying on of hands
Having spent a good amount of money treating a paralyzed rabbit with no improvements at all, Oded, who at the time was a skeptic, decided to ask God to intervene. And as he laid hands on that rabbit, and while he was yet praying, the poor rabbit jumped off and began to walk again!
According to your faith be it done to you
Oded was borderline rude in his request that God heals him of a recurring hip pain, but God, merciful as always, healed him regardless.
Signs and wonders as proof of Gospel truth
After more than an entire year of denying all the signs that Jesus existed and is Lord, Oded came to the end of his rebellion and unbelief, when God healed him of a fever that looked set to weigh him down.
Believers are the aroma of Christ to those around them
Carlos' new life as a Christian was apparently affecting his older brother Thomas. His life was like a pleasant fragrance and before long, Thomas asked to know what the secret was and was told it was Jesus. Eventually he too became a Christian!
Love your enemies and pray for them
Zak Mishriky went on from being a member of the Palestinian Liberation Organization, to a devout Christian who had learned to forgive his enemies and pray for those for who persecute him.
Christian marriage based on love and respect
A Christian policeman learns that for his marriage to work, he must love his wife with the love of Christ, and it was this secret that restored and saved his marriage from destruction for his wife who had left; him returned home.
God using an inner voice to communicate
Ron Cantor shares about the directions for ministry he's received from the Lord through the inward witness of the Spirit and of the remarkable results that followed his obedience to the Spirit's leading.
God answers prayer
At a crusade in Gombe, a Christian schoolteacher preached her heart out before praying for a blind woman who got home before realizing the remarkable miracle that had happened to her.
Salvation transforms
The transformation Maron saw in his customer, who suddenly was no longer interested in buying illicit drugs impressed Maron as he clearly wanted same for himself. So taking the advice of his friend, Maron submitted himself to a Christian rehab and it was there that his life too became transformed.
Holy Spirit provides power to proclaim the Gospel
Armed with the power that the Holy Ghost alone gives, Maron Raheb goes out joyfully, and patiently, to proclaim the gospel of Jesus to Jews and Palestinians alike; from Jerusalem to the West Bank.
Believers have peace with God through the finished work of ChristBelievers are the aroma of Christ to those around them
Jonathan's life and the peace it radiated, was a strong aroma to Peter Nasser who was an unbeliever. When he asked Jonathan what the secret was, Jonathan's simple but very profound answer was, "Jesus!" In the months, that followed their meeting, Peter went on to learn a lot from Jonathan.
The weary are invited to receive rest from Jesus
When Peter became a Christian, he found God's yoke to be light and thus obtained rest for his troubled and hateful soul. As a result, the Jews who he despised; he now loved, so much so that he married one of them!
Gospel is the power of God for salvation
Joshua's parents were both travelling the world in search of meaning and God when they received Bibles and started to read them. In a simple yet powerful way, their eyes were opened to the truth and they received the Lord Jesus into their lives.
The righteous innately have God's heart toward those in needIt is the heart of Jesus to show compassion to the needy
While Sarah is committed to helping prostitutes turn a new leaf, her husband Joshua, is committed to helping victims of human trafficking regain their freedom. Together, they make a team, committed to helping these vulnerable groups of women.
God answers prayerBelievers are the aroma of Christ to those around them
Fifteen-year-old Simon was throughout the duration of a peace camp, praying for his roommate who said he will believe in God, if only he got a sign. At the end of the camp, Simon was feeling deflated thinking his prayers were unanswered when Udi, his camp roommate walked up to him to say, "Simon, you were the sign from God!”
God communicating in a dream
A young Palestinian has an encounter with the Lord in his dream, where he was instructed to get a Bible. After Simon helped him get another he starts to read and had yet another dream that helped answer a question of his. And before long, he became a Christian!
The righteous innately have God's heart toward those in need
For the Palestinian Bible Society, Christianity is summarized in the statement, "God is love". And so driven by this God and His love, they not only teach love to the people but show it practically by meeting the needs of the poor and vulnerable!
Love your enemies and pray for themReligious zealots opposed to the Gospel
Despite the relentless persecution from ultra-Orthodox Jews, Yoyakim Figueras, still finds grace to love his enemies and to 'turn the other cheek'. Rather than be angry and hateful, prayers are instead offered for these people, in the hope that they too will see the light of the gospel of Jesus.