Tortured for His Faith 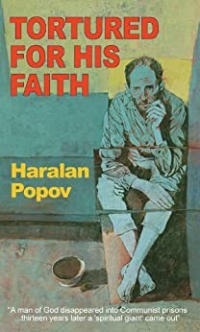 Disciples were filled with joy and the Holy Spirit
Though a convinced atheist, Harlan Popov honoured Christo's invitation to attend a church meeting which did kick-start his journey to faith. Eventually, Harlan welcomes Jesus to his life and the result for him was overwhelming joy.
God using an audible voice to communicate
Harlan Popov hears God's voice and experiences the assurance of His presence while in captivity.
There is no sting in death for the believerDeath for the believer is to be with Christ
With a gun to his head and a promise to shoot after a count of five, Harlan still was unfazed and in fact urged his persecutor, Elias, to shoot. For he had a hope, far more powerful than death and was certain that death was only a bridge to eternity with Christ.
God using an audible voice to communicate
Ten days into his arrest and torture, Haralan Popov began to think that God had abandoned him. But in the very same moment he heard the voice of God clear, and distinct, infusing him with great strength.
Salvation transforms
Harlan Popov led Mitko to Christ while he was in prison. His acceptance of Christ brought peace and calm to his life.
Christians share in the suffering of Christ
In a desperate attempt to break his will, Harlan Popov is heinously tortured by a team led by Comrade Manoff. But through it all, Harlan found his strength renewed in the glorious thought that his all of his suffering was for Jesus's sake.
Believers accused through testimony of false witness
In a bid to destroy the church in Bulgaria, blatantly false testimonies were beared against its leaders. Pastor Ivanoff was sentenced to life imprisonment and his properties confiscated -- because of the false testimony of a marmalade factory engineer.
God using an audible voice to communicate
Locked away in solitary confinement and nearing the point of "madness and despair", Harlan Popov hears clearly, the comforting and assuring words of Jesus.
We must obey God rather than men
Harlan Popov was given the chance to become an informant for the barracks Chief, betraying his faith in Jesus. If he agreed, he will receive better treatment. He rejected that, chose to stand for truth, and suffered more persecution.
God answers prayer
Harlan Popov desperately needed a Bible to aid his ministry with the men in prison. Harlan prayed to God, trusting that the impossible would happen - that he will somehow be provided with a Bible in prison. God answered Harlan's prayer in the most unexpected manner.
Preach the word, in season and out of season
In four days, with no single word uttered, Harlan Popov won the soul of a next door prisoner to Christ. This he did by taking advantage of the "Prison Telegraph" - an amazing wordless means of communication among prisoners.
Fought the good fight
After 13 years of torture, beatings, starvation and months in solitary confinement; Harlan Popov is released from prison. For Harlan, the years of suffering was all worth it; he rejoiced at the fruit of his imprisonment; the many men he led to Christ.
Scriptures essential for knowing and loving God
A sixteen-year-old girl was always asking to borrow Pastor Popov's Bible for the night, curiously he asked to know why one day and to his amazement found that she was spending the nights copying the Bible with her hands. Bibles were a contraband in Bulgaria but this young convert was doing her best to own one.
God answers prayer
Christians all over Bulgaria were united in prayer and fasting that Haralan Popov's visa application to Sweden to see his family and share the needs of the local church be granted. Even when the official responsible for the approval vowed to never give it, the Christians continued to pray and not long after, the Lord stepped in and Popov's visa was granted against all odds.
Scriptures essential for knowing and loving God
Some believers in Bulgaria were putting in incredibly long hours and risking their lives to make handwritten Bibles to meet the dire need of the underground churches in Bulgaria.