I Am N, Inspiring Stories of Christians Facing Islamic Extremists

by Voice of the Martyrs 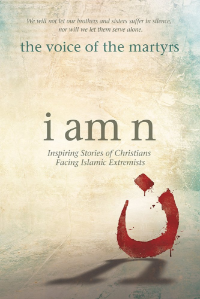 Believers refuse to deny Jesus Christ
Even with a sword to his neck, Abu waa determined to not denounce the Lord Jesus or to accept any other God as being above him!
World not worthy of those joyfully accepting persecution
Having sacrificed all for their faith, Abu, his family and many other Christians from Syria and Iraq became refugees in Ebril. But still, these believers were thankful, regardless of their pathetic conditions.
Believers suffer for Christ, not common crime
Asia Bibi was imprisoned for defending her faith and declaring the Lordship of Jesus. And even in prison, Asia refused to deny her Lord in exchange for freedom. She was ready to suffer and to suffer for the right cause!
Blessed are those who are persecuted
Two Pakistani politicians—Governor Salman Taseer and Federal Minister of Minorities Shahbaz Bhatti were both assassinated for standing up for their faith and for Asia Bibi; a Christian who was unfairly imprisoned by the Pakistani authorities. These men knew the blessings of persecution and were not afraid to lay their lives for the sake of the gospel of Christ!
Gospel is the power of God for salvation
When a drug addict discovered that Jesus loved him regardless of whether he was "a world ambassador or a drug addict", he opened his heart to receive this Jesus and his formerly hopeless life became full of hope and meaning!
Believers will suffer terrible things for the sake of Jesus' name
Hussein was imprisoned and subjected to the most cruel forms of torture all because he jettisoned Islam for Christianity. Even after his release, he was rejected at home, in school and in his society, yet he had only love for the people who mistreated him!
Believers will suffer terrible things for the sake of Jesus' name
Persecution from her Muslim family became inevitable after Nadia, despite repeated warnings not to do so, surrendered her life to Jesus and became a Christian. She was beaten mercilessly and imprisoned in her own home.
Killed for the sake of Christ
Musa's sharing of his faith with the wife of a high-ranking leader in the al-Shabab terrorist organization was bound to lead to dire consequences; especially since the woman was converted to Christ. And though Musa escaped to Kenya, his two oldest sons were not so lucky as they were beheaded for the 'sins' of their father.
Christians are generous and hospitableChristians care for one another in love
Khalida lost her pregnancy, broke her left arm, fractured both legs but somehow still survived a bomb attack at her church in Pakistan that left over a hundred other believers dead. So great was her joy when in the midst of her suffering and deteriorating health, she learned that believers in far away America were not only praying for her but had pulled resources together to help her get the best medicare possible.
Christians confronted by angry mobsBeaten for preaching the Gospel
After 8 days of hard labour with blood gushing out of his hands, Kazim was asked if he was ready to deny the Lord Jesus. “No. Never" was his simple reply and not even the beating that followed got him to change his mind.
Believers accused through testimony of false witnessTrue disciples love Jesus more than even their own lives
With a pistol to his head, Kazim still wouldn't recant his faith in Jesus; he was happy to die if God wills so. When his persecutors could not kill him, false charges were brought against him and used to torture and imprison him. But through it all, Kazim's only sadness was his inability to read the Bible due to his swollen eyes.