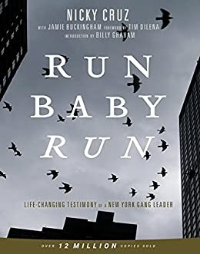 Salvation transforms
Nicky Cruz shares of the indescribable joy that jettisoning drugs, crime, sexual immorality and embracing the love of Jesus brought upon him. No longer was he fearful, anxious or hateful; for he had been baptized with love - God's own love - he had become a new creature.
Salvation transforms
On the night Nicky surrendered to Christ, he felt he no longer needed to run. He went home early, put away his gang clothing and his gun forever. Falling to his knees in his room, all Nicky could say in response to the amazing transformation he was experiencing was, "Thank you, Jesus ... thank you.”
Salvation transforms
When Nicky Cruz and 25 of the toughest Mau Mau gang members appeared uninvited at the police station in Auburn street with their rifles, the police could think of nothing but imminent trouble. And as they made the purpose of their coming known, the police found it impossible to believe; yet Nicky and his friends were serious.
Turn the other cheek
Nicky Cruz was attacked by a rival gang member and responded automatically and defensively. The fight turned in his favor, but before he could deal a blow against the boy, the voice of Jesus came to his mind with the words, "Turn the other cheek."
Believers are the aroma of Christ to those around them
While in the hospital, Nicky Cruz prayed out loud for himself. Through the prayers, God ministered to another man who was in the hospital leading him to pray too.
Holy Spirit directs believers in ministry
Fraught with a feeling of unworthiness and sinfulness, Nicky Cruz had made up his mind to flee from school and return to his old life. But just as he concluded plans to run, the Holy Spirit directed Gene to go stop him and invite him over to church instead where he was reassured of love.
Speaking in an unknown language
After Gene prayed for Nicky Cruz to be baptized by the Holy Spirit, Nicky broke into tongues and went on to worship God in an unknown language for two hours, completely oblivious of the meeting coming to an end.
Holy Spirit provides power to proclaim the Gospel
Nicky Cruz was the leader of the vicious Mau Mau gang had accepted Jesus and was now empowered by the Holy Spirit to proclaim the gospel on the streets - where he was well known for notoriety.