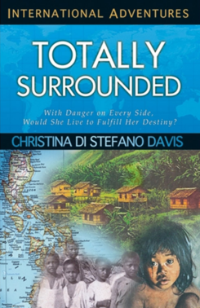 God is our FatherTrue disciples obey the teachings of Jesus
Pressed by a friend who reminded Christiana that “If you’re on God’s side, he calls you his special child. He will be your Father and always take care of you.”, Christiana began attending church, and eventually she made a commitment to follow Jesus, and to tell others about Him!
We are surrounded by a cloud of witnessesJesus commands His disciples to go and make more disciples
Inspired by a great cloud of modern missionary witnesses, Christiana desired to be a missionary to those who had never heard of Jesus before.
God using an inner voice to communicate
While Christiana was in a hurry join her friends, an inner voice spoke to her, telling her to talk with a girl who was studying under a tree. Christiana obeyed and engaged the girl, Lisa, in a conversation about Jesus. Lisa gave her life to Christ right then and there. Within a month, all of Lisa's family followed Christ.
Communities of believers sharing in needs
When the need arose for a church building, the believers from the several villages in the Madras island came together and ensured that their collective need was met. The men, women and even children were all involved, with songs of praise on their lips, they were united in this labour of love.
If God is for us, who can be against us?
Christiana Davis wanted to prove the to a community of young believers that having accepted Christ, they were now on God's side and no one could be against them (Romans 8:31). And this she did, by doing what nobody ever attempted to do; she swam successfully in a dreaded pit that was believed by the people to house many evil spirits.
Believers exchange superstition for faith in Christ
Mila who is a new Christian, learned to let go of her past beliefs and choose God as her only true God.