No Reserves, No Retreats, No Regrets The Early Life and Ministry of Ed Erny 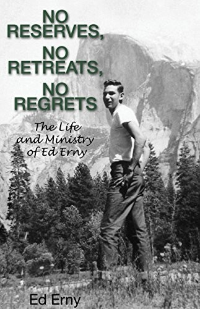 Confessing sin leads to forgiveness
Jerry was evangelized to by Ed at a bar before he was led to a chapel to pray and there a broken Jerry wept to God for mercy and asked for forgiveness. Upon the conclusion of his prayer, a new man emerged, with an absolute assurance that he had been forgiven by his Father.
Entire households believe the Gospel for salvation
A whole family is gradually brought to Christ. Each of them converted at different point, from the youngest to the grandmother.
God answers prayer
Ed, his team and Paul; a new convert found themselves stuck when their vehicle got stuck in mud. After hours of fruitless attempts at getting the vehicle out, Paul, the new convert asked that they pray to God for help and when they did, a most amazing miracle happened.
Holy Spirit convicts people of their sin
Ed is surprised when one night, a young man who attended crusades with the sole aim of arguing with and harassing him responded to the call to accept Jesus as Saviour. After crying and confessing his sins to God and obtaining mercy, with great joy he became a christian that night and continued afterwards in the faith.