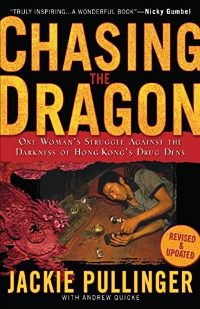 Salvation transformsSpeaking in an unknown language
Ah Tong was desperate to get off drugs. When he asked Poon Siu Jeh for help, Poon introduced him to Jesus and to some men who had been in jail with Ah Tong but are now believers in Jesus. Ah Tong accepted Jesus after listening to their story, he received deliverance, peace, joy and smiled like never before.
Go the extra mile
Jackie Pullinger discovered what it means to "go the extra mile" with those who live in the squalid Walled City of Hong Kong.
Speaking in an unknown language
Jackie Pullinger speaks in tongues after an encounter with other believers.
Forgive your persecutor
Ah Ping was wounded by the rival gang, but refused to let his gang exact revenge. Instead he gathered a few together to pray for the rival gang.
Speaking in an unknown language
One night when Winson accepted Jackie Pullinger's invitation to come worship God, Winson who was fighting his addiction to opium and was only beginning to soften to the message of Jesus was filled with the spirit that he began to pray in Chinese and then in tongues.
Interpretation of unknown tongues
A weary and discouraged Jackie Pullinger received a message in tongues from the Lord while praying. And one of the boys she was with was inspired by the Holy Spirit to interprete the message, bringing a timely and much needed encouragement to Jackie.
God's work will not lack God's supplyGod provides exactly what is needed
Jackie Pullinger shares about God's faithfulness and constant provision despite the increasing needs of her ministry and her not teaching full-time. God ensured they had enough provisions for each day.
No one can serve two masters
David decides to leave behind his evil ways and follow Jesus completely; forsaking the "Jesus" he knew for the one true Jesus. David's conversion became the first of many in the Triad gang to which he belonged.
Signs and wonders draw attention to Gospel message
Poon Siu Jeh prays for a man who was in great pain, to the astonishment of onlookers, the man is healed and they believe in Jesus due to the miracle.
He who is forgiven much, loves much
Ah Kei becomes a Christian due to the influence of reading good books and understanding of Grace.
Salvation transforms
Bibi surrendered to Christ, completely depending on Christ to meet his needs; not only were his material needs met, but his life was also transformed and he became one of the best boys in a house for recovering addicts.
God using a vision to communicateThere is healing in the name of Jesus
After Bibi gave his life to Christ, he was invited by his dying father for final parting words. However, instead of dying, the father was healed and discharged after Bibi prayed for him.
Sermon on the Mount
Ex-convict Suenjai came to Christ and to an amazing understanding of spiritual things through reading and memorizing the Sermon on the Mount.
Disciples must keep their word
Sunejai purposed to simply stand by his word at the retrial of a case against him. He did this and was found guilty for a crime he didn't commit. But while in jail, Sunejai became God's vessel for working miracles in the hearts of criminals!
Forgive, or you will not be forgiven
When Ah Lung told Jackie Pullinger he wanted to become a Christian, she told him he needed to forgive the guards who ill-treated him in prison. He vowed not to but soon changed his mind when he learnt that unless he forgives, he cannot be forgiven too.
Holy Spirit convicts people of their sin
Ah Lung’s remarkable conversion led a 19-year-old fellow inmate arraigned for rape to trust in Christ. So remarkable was the 19-year-old’s conversion that he accepted his wrong, and the consequences, and changed his plea from “not guilty” to “guilty.”
There is healing in the name of Jesus
When Miss Poon spoke to Daih So about giving up drugs and accepting Christ Jesus into his life, he was adamantly opposed and hopeless. He walked out on her and vowed to continue in his ways, but the seed she had sowed in his heart remained. When he returned to his cell, he prayed in the name of Jesus and was delivered!
Jesus and the Apostles raised people from the dead
At age four, Go Hing fell into a pool of water, drowned and was certified dead by two different hospitals. But as his mother kept vigil with his remains over the night, Go Hing awoke to tell her how Jesus (who she had never heard about) came for him in his time of the need. The entire family became Christians as a result of this amazing miracle.
God will provide for our daily needs
Jackie Pullinger was still explaining to Goko's Canadian brother how they pray and have their money needs met by God when an old man walked in with $100 in an envelope addressed to Jackie Pullinger from a man he had never met nor heard of before.
True disciples obey the teachings of Jesus
Go Hing was afraid of pleading guilty to the charges against him, but Jackie Pullinger reminded him that telling the truth was the Christian thing to do. And even though he got a heavy sentence for telling the truth, Go Hing was happy he obeyed His master and obtained forgiveness from Him.
He who is forgiven much, loves much
Having lived a life of horror, prostitution and drug abuse, Elfrida - a woman in her 70s, finally accepts Christ and turns a new leaf. Knowing she'd been forgiven much, Elfrida gave her life to loving much!