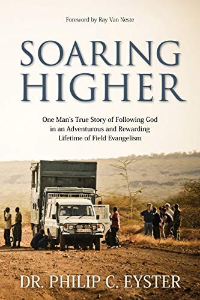 God answers prayer
Despite praying about it, just a few hours to their supposed departure time, the Eyesters had not enough money to make the trip to Oregon where Philip Eyester was to attend seminary. But as they pondered on their situation that night, they received a call that solved their puzzle.
Holy Spirit directs believers in ministry
A sick man publicly confessed his sin of disobedience. Within a few days, he recovered fully. He went on to become an ordained minister.
God will provide for our daily needs
Having moved from Pennsylvania to a seminary in Oregon with little or no money and no where to stay, Philip and Marcia Eyster had to depend fully on God to meet all of their needs and as each need arose the good God miraculously met it.
God communicating during prayer
When an opportunity to join the Navy as a chaplain was presented, Philip was interested, but together with his wife prayed thus; "Lord, if this isn’t your will, you have a week to stop it." That same weekend during a prayer, Philip audibly heard the Lord speak to change their direction.
Deliverance for those imprisoned and oppressed by sin
When Philip Eyster and his team were led to go preach at a maximum security prison in Ukraine, the guards thought they were mad, considering the danger they were exposing themselves to. But after sharing the good news of salvation, they led not only condemned prisoners to Christ but also some of the prison guards.
Demonstration of who is our neighbor
While traveling in Mozambique Philip Eyester and his companions came across a very fatal car accident scene, but while others fled the scene; Philip and his companions went in search of survivors and when they found one, they did their very best to get him to a hospital.
No one can serve two masters
A teenage boy learns that he can either be Christian or Hindu but never both. He then makes the decision to choose Christianity alone. The result for him was overwhelming joy!
Signs and wonders draw attention to Gospel message
An Asian man tried different local cures and witch doctors, in an attempt to get his sick daughter healed, but nothing happened until she was prayed for by a Christian doctor. The miracle of her healing drove him to seek Christ, and he became a great witness for the Gospel of Jesus.
There is healing in the name of Jesus
Bishal was a prominent Hindu priest who developed a virus and became blind and paralyzed, his quest for healing leads him to considering the reality of Jesus. A few days after this, he gets totally healed in an amazing manner.
Father forgive them, for they know not what they do
When a woman's husband is arrested for being a pastor, she gathered her young children to pray for the men who had just whisked their father away. Twenty years later, the lesson of praying for your enemies stuck with her son, who, now orphaned; having had both his parents martyred by the police, was himself now also jailed for his faith.
God blinds the eyes of adversaries
A Christian lady who had her entire family wiped out for being Christians, is faced with a decision to flee or die. She finds safety and is granted asylum in the U.S.A after her miraculous escape from four communist minders while on a musical tour.
Arrested for proclaiming Jesus
A famous Hindu priest immediately starts preaching Jesus when he is healed of paralysis and blindness. Soon, he is arrested, tortured and forced to deny Christ. But he held his ground, and upon his release; continued to preach the gospel leading many to Christ.
Jesus reveals Himself to an unbeliever
Bishal a famous Hindu priest who after looking for healing everywhere began to think of the reality of this Jesus, that resulted to an encounter that changed his life forever.
Individuals opposed to the Gospel
After an elderly man embraced Christianity, he burnt all his idols and a church started in his home. But soon, persecution, from his very own son began - he accused his father of insanity, denied him food and disrupted the church that had started in their home.
Gospel is the power of God for salvation
A hurting man was going to murder his cheating wife and her lover - his best friend. But as he came by a soccer field on his way to them, Dr Philip Eyster was preaching to a mob; proclaiming God's power to forgive anyone of anything. As he listened, the softer his heart became, until a dramatic change occured in him.
Gospel is the power of God for salvation
Yvone's overwhelming problems had led her to resolving to commit suicide. But on her way out of the market having purchased the rope with which she planned to kill herself, the greatest miracle in her life happened when the Holy Spirit drew her to Dr. Philip Eyster's preaching at the same market that night.