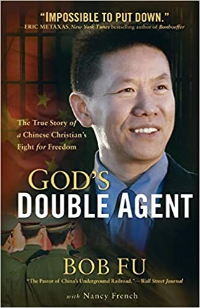 God blinds the eyes of adversaries
Bob Fu is arrested for handing out Christian literature. All that remained was in his bright red backpack, which was sitting obviously on a table in the interrogation room. Bob prayed that God would keep the police from finding the literature, and He did, almost comically.
Apostles sang hymns to God while in prison
The timeless hymn, "The Old Rugged Cross" was Yuan Xiangchen's companion throughout his over twenty-one years imprisonment for refusal to join the Three-Self Patriotic Movement. While other prisoners took smoking breaks, he comforted himself by singing the hymn.
God answers prayer
Heidi; Bob Fu's wife, had secured admission for graduate school at the People's University of Beijing and needed $3, 000 to fund her education. But despite praying everyday for weeks about it, and even sharing the financial need to other men, Bob still could not secure the needed funds. Bob was prepared to give up, but just a day before the deadline for payment, God showed up and answered his prayers.
Transforming power of forgiveness
Heidi was suspicious of Joseph because he had once betrayed her husband. In a remarkable twist of fate, she leads Joseph to faith in Jesus after spending some hours with him.
The Holy Spirit came with power on the disciples
During a Bible training session led by Pastor Ronny for the underground church in Beijing, Bob Fu and other believers present experienced "Pentecost" - the Holy Spirit, like a mighty wind, fell upon them and they spoke in other tongues.
Christians share in the suffering of Christ
Just before his arrest, Bob Fu and his wife Heidi, found comfort and strength as they knelt together to study and pray over Peter's epistle in 1Peter 4 on the need to not be ashamed but to glorify God for sharing in Christ's suffering.
God blinds the eyes of adversaries
Xiqui Fu handed his wife an all important book containing all the contact information of the brethren of the underground church, just before his arrest by the police who searched every nook and cranny of their home hoping to find something incriminating. But God blinded their eyes, as Heidi held onto the book, while their home was ransacked and yet, no one but her husband saw the book she held.