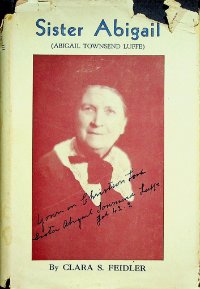 The Word of God discerns the thoughts and intentions of the heart
John Townsend was studying to become a clergyman when the Word of God powerfully convicted him of his own unsaved state. John abandoned his vocational ambition and sought to first know the Saviour for himself.
God answers prayer
John Townsend's decision to accept Christ so incensed his parents that they cut him off and had him disinherited. For 25 years, John was estranged from his parents, despite trying to reconcile with them. But when an opportunity presented itself after many years, he grabbed it - sheltered his now homeless parents, reconciled with them, and eventually led them to Christ.
There is salvation in no other name
A demon possessed woman asked Sister Abigail what remedy there was for her troubles. Confidently, she offered: "There is only one way of salvation. Jesus Christ died for sinners. . . ."
God provides exactly what is needed
Mrs. Luffe (Sister Abigail) needed to buy a house for the blind, lame, and aged though she had no means. God provided everything she needed and just in time.
Confessing sin leads to forgiveness
A thief who had mugged sister Abigail twice in four years suddenly appeared at her door one morning desperate to see her. During their meeting, this convicted thief experienced the greatest miracle of his life - he found the Savior; Jesus Christ.
Salvation transforms
Mrs. Luffe meets on the train to Buffalo, a war veteran through whom she hear the wonderful testimony that Jacob, an ex criminal who had robbed her twice before finding Christ through her continued to live a transformed life and was preaching to men during the war, until his death.