Death Of A Guru 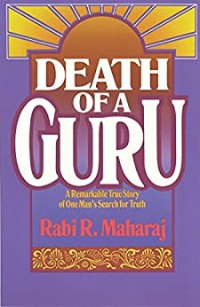 There is healing in the name of JesusChildlike faith required to enter Kingdom of God
A woman who had been crippled for several years read the Bible with childlike faith. She read the healings God had done in the Bible, with this inspiration she prayed to God asking for healing for her condition. Gradually she became completely healed. She praised God for this healing declaring that "Jesus is still alive today!"
Transforming power of forgiveness
Rabi Maharaj and his family became Christians and were astonished at the change and newness of life they all experienced. As Hindus, forgiveness was an alien concept - karma was all they knew. Now as Christians, they were basking in forgiveness.
Salvation transforms
Kumar was a hopeless alcoholic who was wont to throw away huge sums of money at his addiction. When he was visited one day by a former drinking companion, he was amazed at the total change his friend claimed Christ had wrought in him. Wanting same for himself, Kumar surrendered to Christ and experienced the same wonderful transformation in his life.
God brings comfort and peace to the persecutedGod using a vision to communicate
Rabi Maharaj's conversion to Christianity from Hinduism came with a lot of trouble for him. He was shamed, disgraced and became the butt of jokes and ridicule in class. Overcome with sorrow one night, Rabi cried to the Lord in his frustration. That very night, Jesus appeared to him in an experience that imbued him with courage and unending assurance.
God using an audible voice to communicate
Revati was a Hindu, but while performing her puja one day, a voice came to her saying: ‘I am the way, the truth, and the life: no man cometh unto the Father but by me.’ A few days after this experience, Revati denounced Hinduism and embraced Christ.
God answers prayer
By simply praying about his needs and safety, Rabi Maharaj enjoyed God's provision and divine protection - once his bus fair was miraculously provided for and, on another occasion, he was saved from what could have meant certain death for him.
Demons cast out in Jesus' name
Christians in Zurich had given up on preaching the message of Jesus Christ with passers-by. The Salvation Army, on the other hand, arrived with prayer and zeal to preach in the name of the Lord. They reported an extraordinary transformation in the lives of the people, beginning with Raymond, a homosexual and drug addict who was delivered in a prayer session, much to the surprise of other Christian faiths.
Salvation transformsThere is healing in the name of Jesus
Evelyne lived a reckless and godless life, and eventually got stricken with a terminal disease; she spent weeks in coma, the doctors gave her up; for she was already at death's door. But as Rabi Maharaj led Evelyne to Christ on her sick bed, to the utter disbelief of doctors and everyone else, she also found total healing for her body.