The King’s Son A Memoir of Billy Bray 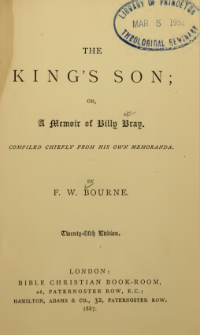 The sheep know and hear His voice
God told Billy Bray to pray for the salvation of two different men, by "speaking to his mind." Both of them came to knowledge of Christ and gave their life to Him before they died.
God answers prayer
Billy Bray was tempted during the illness of his daughter. Rather than succumb to temptation, he prayed to God for divine healing. His daughter was healed immediately and her testimony made Billy bolder.
God's work will not lack God's supply
Billy Bray faced intense opposition to building a church that God had commanded him to build. When the church is complete, it became an important meeting place for believers. Some of those who had opposed him returned to ask for his forgiveness, and he forgave them.
God gave signs and wonders through the apostles
Dorothea Trudel turns to prayer for five of her employees who have become unwell after all other options have failed. They were all able to recover. As word of this spread, a large number of people approached her.
God gave signs and wonders through the apostles
For seven years, Florence Hoskin relied on crutches to walk. She went to a session one day and was entirely healed, never having to use crutches again. Many others came to see "what a miracle the loving Lord had wrought" after hearing of her healing.
God using an inner voice to communicate
Billy Bray was a slave to the twin vice of drinking and smoking. But he became a free man when he yielded to the prompting to quit by the "small still voice within" him.