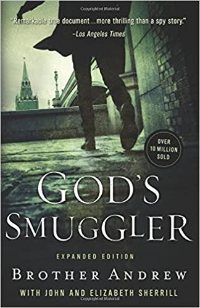 God's work will not lack God's supply
Brother Andrew and a group of young people trust God to provide for tea and cake. God provides in a miraculous way.
God blinds the eyes of adversaries
This story has inspired so many others to trust God in difficult situations, that it is referred to as the "Smuggler's Prayer." Like when the apostle Peter was led out of jail past four guards who never saw him leaving, Brother Andrew prayed that the Yugoslavian border guards would be blind to his load of Bibles.
God is able to bring good from any circumstancesSparks of persecution cause the Gospel fire to spread
Pastor Basil was so notorious for working with the secret police, that they called him a puppet. However, when Brother Andrew visited Basil's church, the Holy Spirit did a strange work in the man, and Pastor Basil himself was surprised when he invited Brother Andrew to conduct evangelistic meetings for three days.
God answers prayer
Brother Andrew was passing across the Romanian border on a day when the guard on duty was inspecting the cars meticulously, taking up 45-60 minutes for each car. Before his turn, he prayed to God asking for a miracle, and what happened that day could only be described as a miracle. He was allowed to pass in less than a minute!
God using circumstances and timing to communicate
Brother Andrew was praying to God that Klaas and Eduard would join their mission team. Unknown to him, God had placed the same burden on their hearts. God orchestrated events that led both of them to join the team without any interference by Brother Andrew.
God is able to bring good from any circumstances
A Romanian Priest who had been in prison for smuggling Bibles was arrested a second time with Bibles in his cargo. Just then a businessman stopped by. He purchased all the Bibles intending to sell them on the Black Market. The Priest was released and the Bibles got to the believers even though not as intended. All things work together for good to those who are called by His name.
God blinds the eyes of adversaries
The KGB were well aware of what Brother Andrew was doing, which he found out after perestroika and the reunification of East and West Germany. It became obvious that Brother Andrew was not a clever smuggler or spy. Instead it was clear that God intervened time and time again to hide his activities from the KGB.
God is our Father
In a meeting that beautifully shows the unity of the body of Christ; Brother Andrew, a protestant, met with Alexey, patriarch of the Russian Orthodox church. And the two, though markedly different in their forms of worship to God, fellowshipped and prayed together as brothers in Christ.