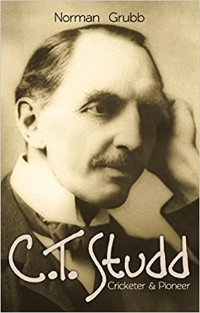 Anointing the sick with oil and praying for healing
C. T. Studd was traveling long distances on foot in China. His feet broke down and one became infected and swollen, to the point that he could not wear shoes. He and one of his companions read James 5:14-15, obeyed it and found complete healing.
Anointing the sick with oil and praying for healing
C. T. Studd's wife was dangerously close to dying during childbirth. They were of the same mind to pray and trust God. C. T. Studd anointed her with oil in the name of the Jesus, and she was healed.
Anointing the sick with oil and praying for healing
C. T. Studd was dangerously ill with the "African fever." He asked the elder of the local congregation, and man in his twenties, to anoint him with oil and pray. Only having kerosene, the young man anointed Studd's forehead, prayed, and the next morning the fever was gone.
God's work will not lack God's supply
God sends CT Studd some new teeth through a dentist Doctor, Mr. Buck, who arrived at the very heart of Africa despite earlier rejections for his application to become a missionary.
God answers prayer
Mr. Harrison needed two missionary volunteers to complete the party of fifteen and about £500 to send them out but had not the means to do either. As the time to send them out drew nearer, the Lord led Mr. Harrison to the verse, ‘If ye abide in Me, and My words abide in you, ye shall ask what ye will and it shall be done unto you’, and he claimed the promise, and in a series of divinely orchestrated events, the Lord provided for both needs.