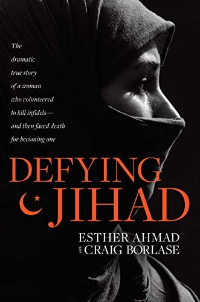 God communicating in a dream
Esther had a dream in which she had an encounter with Jesus, He told her “I am the way, the truth, and the life" and saved her from the graveyard!
Dealing with discrimination in the church
Esther continually faced discrimination and was often faced series of abuse for becoming a Christian and a believer of Christ. But these things only made her faith in God stronger.
Blessed are those who are persecuted
When Esther Ahmad's mother learned her daughter had become a Christian, she physically attacked her. But God's promise brought comfort and helped Esther to "rejoice and be exceedingly glad."
There is healing in the name of Jesus
Esther Ahmad's mother suddenly fell in the market, she prayed for her in the name of Jesus. Instantly, she is healed in what a doctor said "It's a miracle".
God using an audible voice to communicate
When Esther was faced with the daunting challenge of having to encounter an Islamic scholar shortly after giving her life to Christ, she was terrified. However, she fasted and prayed to God, the Lord answered through a voice that encouraged her and pointed her to the scripture verse in Jeremiah 1:4-8, assuring that this was His plan for her. She felt peace.
Blessed are those who hunger and thirst for righteousness
Esther Ahmad challenges her former chemistry teacher to pray for spiritual hunger and thirst.
How to pray
Esther Ahmad shares how her habit of praying to God; asking for their daily bread, got their needs consistently met by Him in simple and amazing ways.
Religious zealots opposed to the Gospel
Esther Ahmad and her daughter; Amiyah, met a Muslim woman at a bus station in Malaysia. The woman's admiration for little Amiyah instantly turned to violent hatred when she learned that they were Christians. But Esther was quick to remind her bruised 3 year old to always choose love.