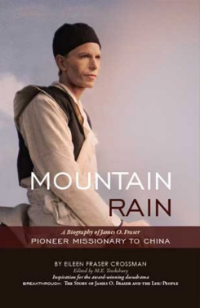 Resist the devil and he will flee from you
James Fraser shares of his adoption of the simple but powerful practice of using appropriate scriptures brought to his mind by the Holy Spirit to resist the devil and have him flee in defeat.
Demons cast out in Jesus' nameSigns and wonders as proof of Gospel truth
After a man and his family gave up spirit-worship for Christianity, his son was soon possessed mightily by demons. But when James was called upon, he led the young believers in prayer aloud that the Name of Jesus might prevail - and so great was the effect of the boy's deliverance to the faith of these young believers.
Our Father in heaven gives good things
Roxie set out to find James who had left home for several weeks and had not returned. While on the journey, the two Chinese helpers she employed abandoned her in the middle of a bush with two children. Instead of panicking, she prayed and prepared a place to rest for the night. Unexpectedly, she heard movements in the bush, it was a search party that was coming to help her. That experience showed her how much God loves and protects His children!
Fear of judgement because of unconfessed sinGodly grief produces repentance that leads to salvation
Danish missionary, Miss Anna Christiansen, preached on sin, righteousness, and judgement. Her message was used powerfully by the Holy Spirit, and “great fear came upon the while church,” as in Acts 5:11. Many confessed their sins, repented and found the new birth.