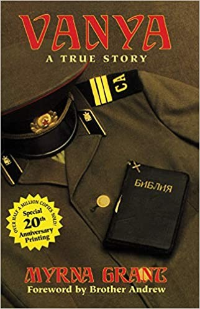 Pray for those who mistreat you
Captain Tarmak tried to break Vanya and make his renounce his faith by confining him and depriving him of food for five days. The officer returned hoping to find a broken man. But Vanya was yet unbroken since the Lord blessed and sustained him.
God sends an angel to help, deliver, or comfort
An Angel appeared to Vanya creating a presence of pure joy and reassuring him saying “Do not be afraid. Go. I am with you.”
Greater works than theseBelievers will suffer terrible things for the sake of Jesus' name
Vanya was sentenced to spend the night in freezing cold as punishment for his belief in Jesus, he turned the time into a prayer session and he was warm up till morning!
Signs and wonders draw attention to Gospel message
Vanya Moiseyev was gravely injured when a truck rolled over his shoulder. But God had great plans to heal him completely for the Soviet atheist doctors and military personnel to see for themselves.
Angels reveal or help with God's ministry planGod gave a glimpse of what is to come
Vanya had an encounter with an angel that took him to other worlds and showed him different prominent Biblical figures. His neighbor did not believe him when he narrated the encounter to him.
Signs and wonders as proof of Gospel truth
In an attempt to mock Vanya and his God, one sergeant told him that “If your God is all-powerful and is alive and can do everything, then let Him get me a leave tomorrow to go home. Then I’ll believe in Him!” All the other soldiers joined in the agreement. To their amazement, the sergeant was granted leave the next day.
Believers will suffer terrible things for the sake of Jesus' name
In an attempt to break his resolve, Vanya was sent to Sverdlovsk for reeducation; there he had to endure the most heinous tortures. But through all of this, Vanya was not broken; instead, he asserted his believe in the supremacy of God's will over the will of his persecutors.
God using an audible voice to communicate
God saved Vanya and a sergeant's lives by causing a minor delay while they were traveling. They discovered several moments later that there's been a grisly accident with casualties; they would have died if not for the delay.
Counted worthy of suffering disgrace for the Name
When Vanya Moiseyev was martyred for the witness of Jesus, his family chose to rejoice even while grieving, in "his exploits of suffering" for the Jesus he so dearly loved.