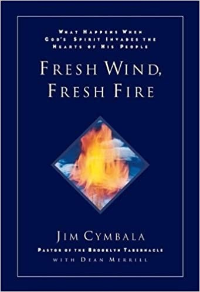 God answers prayer
When it was time to make the church's first monthly mortgage payment, it appeared they would right off the bat; default on payment. But Jim Cymbala, inspired by George Müller's testimony, cried to God for help - and just when Jim had given up, the Lord sent help miraculously.
God using an inner voice to communicateAll great movements of God are birthed in prayer
Jim Cymbala was a young pastor in the very challenging mission field of Brooklyn. Frustrated and discouraged, Jim cried in prayer to God for help and received via the inner voice of God, a resounding assurance and promise.
Salvation transforms
Roberta with history of drug addiction turns to God and joins the choir that used to irritate her.
Salvation transforms
A troublemaker who introduces children on the street to crack and prostitution accept Christ and the change in him is described.
Demons cast out in Jesus' name
A demon possessed girl was brought to the church, she was prayed for and instantly delivered!
Gospel is the power of God for salvation
A young man who was full of hate surrenders to God and on the pulpit, gives up the gun he was about to use to hurt someone, after listening to Jim Cymbala preach about the love of God.
Don't put off the decision for salvation
Dwight Moody learns the hard way, the urgency with which Jesus' assignment to reach the world with the gospel must be carried out, when he postponed calling people to decide for Christ only for disaster to strike, depriving him of another chance to invite them to the kingdom of God.
Those who obey God's teachings are blessed
Graciously but firmly, Jim Cymbala spoke the truth to a young couple on the dangers of Christians co-habiting while yet unmarried. Michelle and Steve, the young couple in question took his advice and their lives became the better for it.
Jesus came for sinners and those rejected by society
David, a homeless man for six years walked up to Jim Cymbala after a church service. Contrary to Jim’s expectation, he wasn't seeking for money; he wanted Jesus in his life. David was led to Christ, rehabilitated, and had his life completely transformed. He got married, became a father and most importantly, a witness for Christ Jesus.
Ask Me anything in My name
Father Nash was a Christian brother who gave his entire life to intercessory prayer for the ministry of Charles Finney. Armed with God's promise to give whatsoever is asked in believing prayer, Father Nash would travail, sometimes for days, until he prevailed.