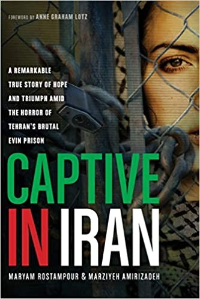 Imprisoned for preaching about Jesus
After hours of gruelling interrogation, Maryam and Marziyeh were detained for "Advertising and promoting Christianity in Iran". Both happily they declared to their captors; "we are proud of these handcuffs because we’re wearing them on account of our faith in Jesus Christ."
Whoever hears and believes has eternal life
Maryam had been searching for the truth since she was seventeen. One day, she received a booklet that was a part of the Gospel of Luke from the Bible, that day she encountered Christ through His word and presence. She then made a commitment to Jesus while alone in her room.
Whoever hears and believes has eternal life
Marziyeh finally surrendered her life to Christ after receiving a vision of Him while praying.
Speaking in an unknown language
After leaving a Bible study meeting on the early believers receiving the gift of the Holy Spirit and speaking in tongues, Maryam wanted it for herself and received the gift later that day in her room.
Signs and wonders as proof of Gospel truth
Before finally becoming a Christian, Marziyeh was invited to a Christian meeting where she was miraculously healed just before her appointment with the doctor. This healing experience sowed the seed that would eventually help lead Marziyeh to Jesus Christ.
God blinds the eyes of adversaries
Maryam and Marziyeh were smuggling three thousand Bibles at night to their apartment when they were met by the Police in traffic. Too late to turn around, the prayed for God's protection and suddenly, a fight broke out to distract the police, allowing them to escape the Police who were previously searching all vehicles.
Preach the word, in season and out of season
At a great personal risk, Maryam and Marziyeh committed themselves and their resources to traveling all over Iran evangelizing and distributing New Testament Bibles to random strangers. Even after they were eventually arrested, they continued their evangelism for Christ behind the four walls of prison.
The Holy Spirit came with power on the disciples
Marziyeh thought it impossible that she would ever speak in tongues, but one day, after yielding to God, the impossible became possible; publicly, she spoke in other tongues. This great experience continued even after she got home.
Jesus reveals Himself to an unbeliever
Jesus tells a man to get a Bible and go meet Him through it.
God answers prayer
Ziba's only hope to securing bail from prison was tied to a condition she'll rather not agree to. Feeling helpless, she ran to Maryam and Marziyeh who prayed with her. Days later, in an undoubtedly divine manner, God answered their prayers and Ziba secured bail.
God communicating in a dream
Through a powerful dream, the Lord Jesus helps Marziyeh realize that her stay and sickness in prison was so she could share a little in the great sufferings of her Savior.
Apostles sang hymns to God while in prison
Maryam starts to lose the assurance that God was with her in prison, she asks that He shows Himself to her in "a special way". She sang hymns in her tiny cell, and the Lord flooded her soul with His peace that passes all understanding.
Believers refuse to deny Jesus Christ
Maryam and Marziyeh still did not denounce their faith while in prison and faced with death threats, they experienced God at work.