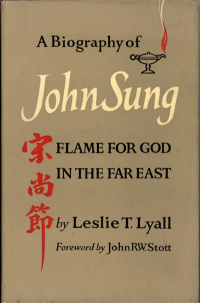 Jesus taught with authority
The story of Dr. Siong-ceh Sung, the brilliant Chemist whose desire to seek the secrets of God was ignited by the powerful preaching of a fifteen year old girl.
Holy Spirit convicts people of their sinHoly Spirit provides power to proclaim the Gospel
When in the place of prayer, John Sung becomes conscious of his many sins, he cried to God for forgiveness until he heard a voice saying, "Son, thy sins are forgiven". The result of receiving forgiveness for Sung was great joy, and the empowerment to become a witness for Christ Jesus, just like he desired.
God is able to bring good from any circumstances
John Sung was frustrated to find himself in a sanatorium with violent mentally ill people. After he was caught trying to escape, Sung wanted to end his life but soon heard a message from the Lord that completely changed his outlook. And for a total of 193 days, Sung happily stayed in that asylum, which became his training ground for the work ahead of him.
Holy Spirit convicts people of their sin
Revival broke out in the city of Tenghsien leading to several confessions including some high profile individuals.
Holy Spirit renewal for the repentant
When the time for the Shanghai Bible Conference arrived, the prospects were not bright. However, as the days went by and the word of God was preached to the people, they entered into serious prayer. On the last day, the spirit of God broke out leading to confessions, commitment to God's work, and evangelism.
God is able to bring good from any circumstances
A shipwreck experience taught Dr. John Sung the truth in the passage "All things work together for good to them that love God.".
Holy Spirit convicts people of their sin
Under the leadership of the Holy Spirit, Dr. Sung confronted the church leaders about their sin of unforgiveness during a meeting. This led to confession and repentance. The meeting ended in unbounded joy.
Holy Spirit renewal for the repentant
Three miracles showed the manifestation of the spirit of God and endeared many to give glory to God.
God bestows gifts and healing through the laying on of hands Signs and wonders draw attention to Gospel message
Mrs. Lo had been paralyzed for eighteen years until Dr. Sung prayed for her and lay his hands on her in a prayer session; she was immediately healed, and her story sparked revival in another community.
God bestows gifts and healing through the laying on of hands
Mrs. Lo, paralyzed for eighteen years, was completely healed through prayer and the laying on of hands. She went on to travel the countryside, proclaiming the great things God had done.
God's work will not lack God's supplyGod using circumstances and timing to communicate
Dr. Sung wanted a confirmation that he should remain an itinerant evangelist. God provided the confirmation.
Signs and wonders as proof of Gospel truth
John Sung prayed in faith for the healing of a pastor's wife who had a heart attack and was at the point of death but nothing seemed to change. Still, he cried all the more to God and in faith declared that it was done. When he returned later to her home, he found, to the glory of God that she had been healed.
Holy Spirit renewal for the repentant
During a visit to Amoy, China, Dr. Sung spoke powerfully about the love of God to crowds of people gathered to hear His word. Many who were unsaved and lukewarm came under conviction and were transformed, then returned to their homes to witness the new life they had found in Christ Jesus.
God gave signs and wonders through the apostles
In 1935, Dr. Sung visited the village of Golden Well in Fukien and there he held several services that were accompanied with many miracles. Souls were saved, addictions were broken, visual impairment, nephritis and even leprosy were healed by the power of God at work in his servant.