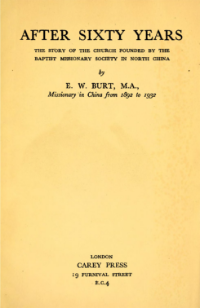 Signs and wonders as proof of Gospel truth
In her quest to find spiritual satisfaction for her soul, Mrs. Tsui sought every means and practice but still she was not satisfied. She was introduced to Christianity but rejected it because the virgin birth was stumbling-block. After two years of hesitation, she became a follower of Jesus Christ and an earnest soul winner! This came about after she vowed that if a neighbor who was ill became healed it would prove to her that Christianity was true. The neighbor was healed and she kept her vow!
Scripture, baptism, spiritual gifts, communion, evangelize, suffer
After a series of meetings at the Arts College of Shansi University in Taiyuanfu, the spirit of revival broke through with the students requesting for a day to hold prayers only. During these prayers, not only were long-standing quarrels settled, but many, across different denominations also decided for Christ and were baptized.
The righteous innately have God's heart toward those in need
During the 1911 Chinese revolution, many people in Shensi lost their lives. But from far away Peking, J. C. Keyte who had just arrived from furlough led a rescue party at a great risk to Shensi so as to save fellow missionaries, while the doctors stayed back to help and save many who were sick and wounded including the daughter of a known archenemy of Christianity.