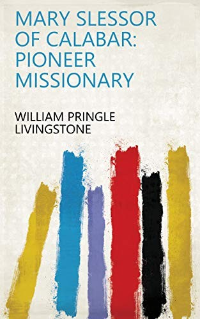 Preach the word, in season and out of season
Even before her missionary journey to Calabar, Mary Slessor was already doing Kingdom work. Her persuasive approach to sharing the gospel influenced some of her friends to also become foreign missionaries.
Reading and studying essential for believers
Realizing the urgent need for education among the people she hoped to share the gospel, "Ma" (Mary Slessor) set up schools where she personally taught basic literacy and arithmetic. Without discrimination, men and women, old and young, bond and free were all welcomed to come learn. Upon hearing about this good thing, many villages opened up to her to come visit.
The righteous innately have God's heart toward those in need
Mary Slessor gave herself to caring for twin babies (then called bush babes) who were often abandoned to die or brought to her to nurse. With the dedication of a mother, “Ma” nursed these little gifts from God who were being abandoned with tender care.
The righteous innately have God's heart toward those in need
With great bravery and love, Mary Slessor rescued Iye, a slave who had just birthed the then abominable twins and was cast out like a plague, alongside her newborn children.
Vengeance belongs to the Lord
Akom was renowned for her zealousness in upholding the superstitious practices of her people. But after Akom is herself accused of witchcraft and exiled, she became a Christian and opened herself to the transforming power of the gospel. So great was Akom's transformation that she forgave her accuser despite temptations to seek revenge.
We must believe that God exists and that He rewards those who seek Him
An old unbelieving chief makes up his mind to find God after the painful loss of his son. Mary Slessor led him in prayer to become a Christian.
Salvation transformsWe must obey God rather than men
The natives of Arochuku not only defied great odds to become Christians, but even as spiritual infants, they stood up to their persecutors and were willing to die for the cause of Jesus Christ.
The people held them in high esteem
At a wedding breakfast, a Mohammedan (a Muslim) who highly regarded Mary Slessor declared, "Only God can make you such a mother and helper to everybody".
Christians are generous and hospitable
While still trying to settle her guest in, a mother, her twin children, husband and father - who had been exiled by their people appeared on her yard seeking shelter. Hospitably, Mary Slessor ("Ma") received her uninvited guests; fed them, sheltered them, attended to the twins and had her guest comfort the weeping mother.
Strengthening and encouraging new disciples
Upon hearing about the discipleship needs of young believers in Ikpe, Mary Slessor, notwithstanding her body weakness determined to go help out even if it meant not earning any salary for her labours.
Blessed are the peacemakers
Mary Slessor, having earned the trust of the people among who she laboured was the trusted peacemaker. When there was mob trouble or an enraged crowd, she was trusted to broker peace, even the government depended on her to reach the people.
Christians care for one another in love
When Mary Slessor's work was interrupted by a bout of illness. The loving-kindness and care shown her by two Christian families; Dr. Robertson and his wife and the hospitable Macgregors during her convalescence left her so thankful that she described that period of rest as “perfect a fortnight as ever I spent.”
God's work will not lack God's supply
For Mary Slessor, money was nothing to covet. It was but a means to getting God’s projects done. Sacrificially, she used what she had to do the work of God, including her salary and personal gifts. And though her needs were many, she never lacked!
Don't be anxious, instead make requests known to God
Mary Slessor was growing anxious over the state of her finances when in answer to prayer, a friend sent her a small but timely financial gift. A grateful Miss Slessor wrote this friend to say, "... your gift is a direct answer to prayer".
God answers prayer
Mary Slessor had such deep faith in God and prayers that when asked to write her testimony on the subject she wrote; "My life is one long daily, hourly, record of answered prayer...It is the very atmosphere in which I live and breathe and have my being, and it makes life glad and free and a million times worth living. I can give no other testimony..."
Ask Me anything in My name
Like a child in conversation with her loving father, so was Mary Slessor's prayers to God. When she needed strength or help with anything -- like finding her misplaced reading glasses; God was her go-to Person. And He always answered her!