New Testament Fire In The Philippines 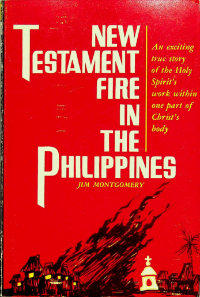 Jesus and the Apostles raised people from the dead
Three days after suffering a heart attack, Evelyn Quema's dad was confirmed dead; after examination by a doctor. Upon hearing the news, her mother rushed to the hospital's chapel, and there she earnestly prayed that God to bring her husband back to life. To the utter amazement of everyone present at the hospital that night; Evelyn's dad was brought back to life.
Walk by the Spirit to discipline the flesh
New converts described how accepting Christ into their lives led to a change in lifestyle; some stop smoking, others stopped cockfights, and others stopped gambling. The change in their lives was clear that it led others to Christ.
There is healing in the name of Jesus
An evangelist is forced to quit preaching given his deteriorating health. Sick with tuberculosis, he attended a meeting where he became instantly healed in answer to prayers offered there. Having been made whole, he returned to preaching, pioneering and planting churches.
Signs and wonders result in mass conversions
Mrs. Europa's prayer for a man with a skin disease and his immediate healing led to a series of conversions starting from the man's immediate family, then his extended family and eventually many more in Basalan - his community.
Signs and wonders result in mass conversions
Mrs. Europa attended a meeting where Mrs. Thompson was preaching and praying for the sick. She had been suffering from severe pains in the lungs for sometime. Her mother was also ill. Both of them were healed at the meeting after Mrs. Thompson led them to express faith in Jesus, laid hands on them and commanded the sickness to be cast out in Jesus. That led to a massive acceptance of Jesus within the family.
Gift of speaking to someone in their languageDemons cast out in Jesus' name
The deliverance of a demon possessed woman opened the way for the establishment of a church.
God using a vision to communicate
Francis Radoc Sambire was a young believer who wanted to be baptized with the Spirit. In a vivid vision one day, she saw the Lord about to exchange her "black heart" for a new one. That same night, she experienced the baptism she so desired.
Holy Spirit provides power to proclaim the Gospel
Pastor Pascal, the pioneer church builder of Ilocos Norte, shares about the radical change in His ability to proclaim God's word, and the accompanying results, since His empowering and baptism by the Spirit of God.
God bestows gifts and healing through the laying on of hands
Four stories demonstrate the power of God to bring healing to physical bodies through prayers.
Signs and wonders draw attention to Gospel message
Antonia Lukban narrates how he began attending an evangelistic meeting with great skepticism, only to witness the dramatic healing of a woman after the preacher prayed for those in need of healing. That night, he gave his life to Christ.
Signs and wonders draw attention to Gospel message
Different stories show how people come to accept Jesus by experiencing the power of God to heal sickness and diseases.