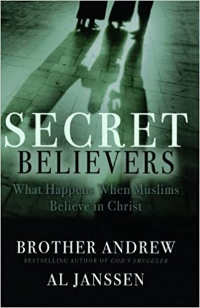 Believers refuse to deny Jesus Christ
Despite the severe and repeated beatings he had to endure from his own family, Ahmed resolved to not deny the Jesus. Even threats about death could not deter Ahmed; he was not afraid to die for the truth he had discovered.
Salvation transforms
Mustafa, a former persecutor describes how he is a new creature as a result of his new belief in Jesus.
Turn the other cheek
A Muslim background believer describes how Jesus' teaching to turn the other cheek spoke to him as truly heavenly teaching.
Religious zealots opposed to the Gospel
Inciteful sermons by Imams and hateful rhetoric against Christians was the weekly norm in the Libyan town of Suq Al Khamis. One Friday, a radicalized mob put words to action when they went round town; torching and attacking, exclusively; Christian-owned businesses.
Everyone angry with his brother subject to judgement
Nadir, a Muslim background believer, shows that ideologies command murder, but Jesus commands love.
Religious zealots opposed to the Gospel
Because of his commitment to spreading the gospel in his Middle Eastern home country, Butros' family was threatened several times. All Christians were at risk, especially young women. Religious fundamentalism and provocative sermons from zealous imams were common, all with the acquiescence of law enforcement agencies.
Forgive your persecutor
Abuna Alexander reminds the angry believer's at St. Mark's Church in Suq al Khamis that despite the persecution they faced from their Muslim neighbors, love and forgiveness was the response Jesus expected from them all.
There is healing in the name of Jesus
Nazim had a stroke that paralyzed his right arm. He believed God for healing, and according to his faith, had his wish granted. After his healing, he returned home and began to teach children to read and write, primarily using the Bible.
Beaten for preaching the Gospel
A local mullah and member of the Taliban came with thugs, and had Nazim beaten to pulp - his only crime was teaching children from the Bible. But Nazim didn't stop, there was no going back for him; even while dying, he gathered his family friends and boldly declared God's message to them.
Bereans searched Scriptures to verify new teachings
Qaf, as a young Muslim, studied the Christian faith, and then studied Islam with the same vigor. Convinced of the truth he gave his life to Christ, and suffered for it.
Blessed are those who are persecuted
Brother Andrew helped a community of Christians, devastated by a Muslim riot, to forgive their persecutors by reminding them of the teachings of Jesus about the blessedness of persecution.