I Found God In Soviet Russia 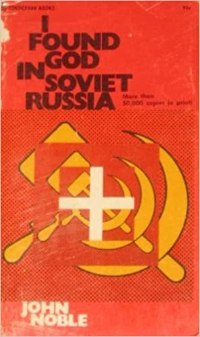 One must be born again to enter the Kingdom of God
John Noble was dying of starvation in prison and was yet unsaved, but as his bodily suffering peaked and he sensed death knocking, John accepted at last; that only through Jesus could he truly be saved from suffering. And with his will fully broken, John welcomed Christ's will for his life and the result for him was priceless salvation.
God answers prayer
A very weak Charles Noble was being starved in prison and one night, when the weakness seemed unbearable, Charles cried to the Lord for one or more slice of bread. That same night, the Lord sent Charles help using the most unlikely vessel.
God answers prayer
When a young student of Forestry was imprisoned for no just cause and brought to the same cell with John Noble, they prayed together each night for his release and one day he was released - without explanation - becoming one of fifteen prisoners out of 21, 000 to ever be released like that.
Apostles sang hymns to God while in prison
Charles Noble was blessed with a Bible in solitary confinement. He read it through several times and also sang hymns to pass the time. This resulted in his being full of the Lord's inexplicable peace and joy, and of being a witness to his jailers.
Believers need fellowship to grow
John Noble shares about the priceless fellowship believers held in prison to encourage each other in the faith, and the great collective risk they took whenever they got together for the “illegal” fellowship.