Even In Our Darkness 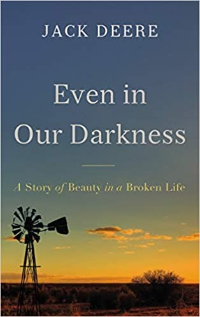 God bestows gifts and healing through the laying on of hands
Ruth called to inform Jack of an angiogram revealing an aneurysm in her head; effectively making her brain susceptible to exploding like a time bomb. Upon receiving the news, Jack and Leesa went over to lay hands on and pray with Ruth. A few days later, Ruth called to break the most amazing news; she was healed!
Demons cast out in Jesus' name
A chronically depressed woman requested for prayers for her lusting after men's approval. As Dr. White laid hands on her and began praying she began to exhibit the signs of demonic possession but as he invoked the name of Jesus, the storm was quieted and peace returned to the woman.
Love your enemies and do good to them
Ruby, Gunner's sixteen year old daughter, was shot in the back and died as she tried to flee from Billy Rupp who wanted to rape her. But even after Gunner caught Billy, he sought no vengeance but instead forgave him, visited him in jail and eventually led him to Christ before he was executed by the State of California.
God using a vision to communicate
When a student walked into Dr. Jack's office to submit a late assignment, the Lord took Jack on a trance wherein it was revealed to him that the student was suffering from an addiction to pornography. Back from his trance, Jack mentioned this to the student who confessed and agreed to be prayed for. For ten years after that prayer, Jack still received messages from this student thankfully informing him that "the weight that had lifted hadn’t returned".
God communicating in a dream
Dr. Jack Deere met this stranger at a meeting who told him God had given him a message for him via a dream. He went on to state with puzzling accuracy, things about Dr. Deere's life no one else could know, including a personal prayer of Dr. Deere and assuring him of God's intention to answer his prayer.
God gave signs and wonders through the apostles
A woman who had been diagnosed with diastematomyelia - a split spinal cord - since from birth was scheduled for a delicate surgery that could leave her paralyzed or even dead. But after John Wimber prayed for her in San Diego, the most amazing miracle happened and was confirmed by her doctor; she now had one spinal cord!