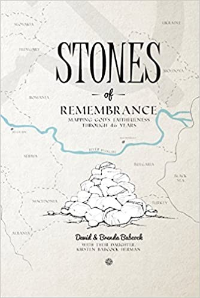 God blinds the eyes of adversaries
Eight young missionaries were taking Bibles and literature into Communist Bulgaria. Thinking of Brother Andrew and his prayer to blind the eyes of the border guards, like He did for the Apostle Paul when He led him out of jail, they wondered how God was going to get these Bibles through. Never did they imagine that He would do it...using vomit.
God bestows gifts and healing through the laying on of hands
Terry had wandered into the woods; sick and delirious, with a high fever that continued to escalate when he was found by his colleagues. The team gathered, laid hands on Terry, and anointed his head with engine oil - the only oil they had. And as they invoked the name of Jesus Terry's fever was broken, until he became totally fine.
Governments opposed to the Gospel
The Bible in Eastern Europe was a serious contraband equated to guns and drugs; its availability and use was vehemently opposed by the nation States. But God's people at Operation Mobilization were undeterred in their quest to resist this opposition to the Gospel.
God answers prayer
Bonnie had misplaced the $80 she was sent with to get supplies for her family. Being the only money her family had to live on, they were hit by the news. But an unlikely miracle happened after they prayed and went out on the streets to search for the money.
God using circumstances and timing to communicate
Just a minute delay on the risky journey to smuggle Christian literature into Romania could spell serious disaster. But on one of these journeys, the ten minutes delay Trevor and Andy encountered was their saving grace from certain disaster.
Governments opposed to the Gospel
The communist regimes in Eastern Europe oppose the gospel and as a matter of priority, "any ministry among children". But at a great risk, believers are defying the odds, and smuggling Christian literatures across borders, just so God's work continues unhindered.
God sends an angel to help, deliver, or comfort
A stranger helps Sarah escape thirteen men who had been trailing her in Romania.
There is healing in the name of Jesus
Everyone but Hakim's friends had given up on him because of his deteriorating health. Fervently, the five of them, guided by David Babcock; petitioned God for his healing. And on the morning after they prayed in Jesus' Name for him at the hospital, Hakim, to the astonishment of his doctors, was well again.
Jesus reveals Himself to an unbeliever
Because of his aggravating illness, Hakim, a Muslim boy, was given up on for dead by his doctors. But one morning after an encounter with Jesus, Hakim is given another chance to live. Resolutely, young Hakim committed his life to Jesus- his healer, scorning all warnings and offers by Muslim leaders in his community.
Let your light shine such that people see your good works and glorify God
The translator tasked with helping Ambrose communicate with the Russian police opened his heart to Jesus, after hearing Ambrose (who was arrested on the suspicion that he was a spy) share about Jesus, Bible stories and then watching him pray to God.
Unbelievers unable to see light of the GospelBelievers are light in the Lord
During the years that communist governments were prevalent in Europe and most Christians were underground, the KGB kept searching for Gennadi but they could not locate him. They hired a top medium from India who confessed that he could not locate Gennadi because he was protected by light. It was the Light of Christ.