Answered Or Unanswered, Miracles of Faith in China 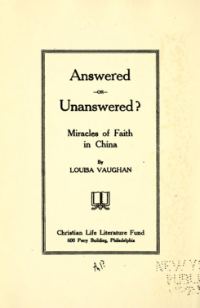 Father forgive them, for they know not what they do
Mrs. Wang was a woman whose husband constantly reviled and curse her. But instead of resorting to a violent form of conflict resolution, she constantly prayed that God should forgive him. Eventually God answered her prayers and her husband became a Christian.
God answers prayerDon't be anxious, instead make requests known to God
While on a journey with “friends,” Shao Wei Chao was deceived and robbed of all his belongings, leaving him stranded in a land that wasn't his. In his confusion, he was reminded by the Holy Spirit to pray and he did, what happened as he prayed for help, could have happened only with God's mighty help.
Holy Spirit convicts people of their sinHoly Spirit directs believers in ministry
Miss Vaughan was led by the Holy Spirit to ask that specific prayers be prayed at a Christian conference, and as they obeyed this leading of God, the Holy Spirit, with greater power and conviction, fell upon them.
Give to everyone who asks
Miss Vaughan writes about the results a great revival among the Chinese with whom she worked. Men and women alike were both confessing their sins of covetousness and were giving liberally; their time, experience and prized resources for the advancement of God's cause.
Deliverance from enemies and circumstances
Shao Wei Chao and others were by the mercies of God, in answer to prayer, saved from what seemed like a definite death while traveling by sea. Though they watched others perish, they were preserved by God's mercy alone.
Holy Spirit convicts people of their sin
A Chinese farmer called Mr. Swen was convicted of his sins and he publicly confessed them, promising to turn a new leaf. As he matched his words with actions, he saw like never before, God's mighty power at work in his business.
Give and it shall be given unto you
Mr. Swen was enjoying an increasingly bountiful harvest from his farm as he faithfully gave a tenth of each harvest like he promised. But soon, he gave in to covetousness and stopped giving like he had promised. The result was a woeful harvest.
Holy Spirit convicts people of their sin
That His people will be willing in the day of His power, was what Miss Vaughan and Pastor Swen experienced when a people who while still backslidden vowed to not support God's work were now more than willing to do so when the Spirit of God moved amidst them.
Disciples must keep their word
Miss Vaughan and Mr Leng's family agreed to pray everyday for Mr. Leng, a backslidden Evangelist on death row for the crime of Vandalism. After over a year of keeping to their word, the impossible became possible!
God, with great demonstration of love, forgives the truly repentant
Chinese farmer, Chang Fang Yuan, heard the story of The Prodigal Son from Miss Louisa Vaughan in a tent meeting. Chang had attended simply "to hear a white woman speak Chinese," but by the end he saw himself as the Prodigal and begged to know how to get back to his Heavenly Father. The farmer was saved and boldly returned to his village in spite of the promise of great persecution.
Father forgive them, for they know not what they doCounted worthy of suffering disgrace for the Name
Chinese farmer, Chang Fang Yuan, was nearly beaten to death for preaching the Gospel in his village. But he didn't die, and instead prayed to the Father for the forgiveness and salvation of his attackers. His prayers were answered.
God gave a glimpse of what is to come
Mrs. Jang was miraculously brought back to life to share with her family and many who flocked to listen to her, the revelations of heaven she had received. But God had told her that He would take her back on the 12th day of the following month, and on the appointed day, Mrs. Jang happily went back to God.