The Guiding Hand or Providential Direction Illustrated by Authentic Instances 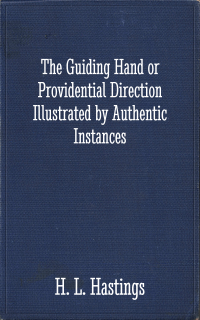 Deliverance from enemies and circumstances
He came with only two things in mind; to rob his victim and to murder her if she made any attempts to stop him. But his victim was a believer, who knew to run to the Lord in trouble—and this she did—so he left her house without a single property of hers other than the Bible she willingly handed him.
Don't be anxious, make requests known to God, and He will give peaceDon't be anxious, instead make requests known to God
Rather than allow anxiety get the best of him, a needy Pastor took his needs to the Lord and made specific demands of His Lord. And over the course of the following days, he watched with astonishment, as the Lord answered his prayer one day at a time.
God is able to bring good from any circumstances
When a businessman who planned on going to Bristol suddenly fell sick and had to turn back home, it was only years later before he realized that his illness could have been providential as a group of robbers and murderers were waiting for him to get to Bristol so they rob and kill him.
God answers prayer
After a man's demise, a wicked neighbor was bent on forcing his bereaved widow to pay for a work he already paid for while alive. Try as much as she did, the poor woman could not find the receipt of payment but as she took to prayers, a butterfly flew into her house, and the next thing that happened was a miracle that filled her mouth with praises!
God is able to bring good from any circumstances
When a heavy downpour ultimately saved him from death, a businessman learns that sometimes, 'a multitude of our afflictions; by causing us slight and short sufferings, they preserve us from others far greater, and of longer duration.'
God will provide for our daily needs
It a was severe winter, and as the cold increased, so did the snow increase, rendering the roads—through which wood was supplied to homes in a city for heating—inaccessible. But in that city lived a widow, poor in earthly possessions, but rich in her faith toward the One who owns the universe. And while even the rich in her city were in want for wood, this poor widow had her need supplied by the direction of her gracious God!
Deliverance from enemies and circumstances
A poor laborer in a deep excavation taking refuge from the weather when he saw a raven pick his work gloves and fly away with it. Naturally, he rose to follow the raven but just as he did, the exact spot where he was seated caved in. And so was his life preserved, by the timely intervention of a raven!
Disciples must keep their word
A Christian woman had promised to give out all of the money God will give her to a poor widow, and by the providence of God found a long hidden treasure chest in her home the next day. And just like she promised, gave it away; keeping her word like Jesus commanded!
Deliverance from enemies and circumstances
The disturbing noise of rats was God's mighty, however unconventional tool in rescuing a family from a fire incident that could have killed them.