The Wonders of Prayer 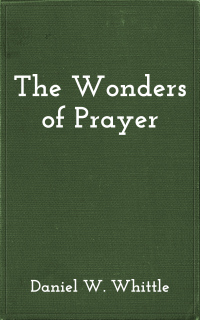 God will provide for our daily needs
A poor man‘s family was completely out of food. In faith they prepared the table for a meal before their children, then went to their knees as a family. Their prayers were interrupted by a knock at the door and the literal provision of their daily bread.
Seek first the Kingdom of God and His righteousness
A deaf man had lost all of his earthly possessions in the American Civil War, and then his small business was ruined by an employee. There was no refuge for the man and his family but God Himself. In prayer he was impressed with the command in Matthew 6:33 to seek first the Kingdom of God. As he acknowledged that this was the desire of his and his wife's hearts, great peace and rest came over him. Soon the Lord provided for his needs from an unexpected source.
Don't be anxious for what to eat or wear
An indebted widow is freed from all anxiety about her debts when she reads the Bible and decides to cast her cares upon Christ. On the due date for payment, the Lord showed His mighty hand.
God communicating in a dreamPrayer of faith for the sick
During a gospel meeting an earnest request was made for a young woman who was dangerously ill with a fever. Dr. Whitehead prayed for her both before and after the preaching and the girl was healed. But remarkably, before she had fully recovered, she had a dream in which Dr. Whitehead—whom she had never met nor seen—was praying for her. Not only was she healed, but for the first time she had the assurance of her own salvation. Later she met Dr. Whitehead and fainted when she recognized the man from her dream!
God communicating during prayer
God spoke to the Rev. William Bramwell while he was praying for safe travels for a young woman. God told him to warn her not to go on the voyage the next day, and she heeded the warning. Six weeks later they learned the ship had sunk. There were no survivors.
God will provide for our daily needs
A little girl with a sick mother and no food in the house, knelt to pray the Lord‘s Prayer. Later she wondered where God kept his bread, so we went out and found a bread shop. "Ah! There is God's bread shop," she said. She then asked for two loaves and turned to leave without paying. The shopkeeper spoke angrily, but when he heard her simple childlike faith, he softened and gave her the bread.
God will provide for our daily needs
A mother and her son learn that God answers prayer. When they were hungry and prayed for their daily bread, the very next morning He provided steady work for the mother.
God answers prayer
A young boy who gets saved as a slave prays that the Lord will arrange for his parents too to come to India and be saved. It took two years but he wavered not, and still believed, until his prayer was answered.
Give to everyone who asks
A poor lady was down to the end of her funds when a friend came to her in distress. In obedience to the scriptures, she gave to her friend. The next day, when she really needed what she had already given away, the Lord provided.
Give and it shall be given unto you
A Christian clergyman writes about his resolve like Jacob, to give a tenth of his earnings to the Lord, and of the wonderful results his giving has produced in his life and in the life of his congregation.
Don't let left hand know what right is doing
Deacon Murray had just selected and given for free, a whole cow to a poor neighbor, but soon called on the excited man to return the cow before he got far off. On returning the cow, Murray then declared to his poor neighbor, "There, now, take your pick out of the cows; I a'n't going to lend to the Lord the poorest cow I've got."
God answers prayer
A lady felt led to use all her to care for orphans but wanted to be sure God was the one leading her, so she asked him for a sign in prayer. Three weeks after her prayers, she received the exact sign she asked for and was enabled to obediently carry on with her plan.
God's work will not lack God's supply
In the early days of D. L. Moody‘s marriage, they were very poor. Often he wondered if he should quit full time ministry and return to shoe sales. But as he forgot about sublunary concerns and focused on the work of the Kingdom, God provided for their daily needs.