Tales from the Middle Kingdom, Stories of China 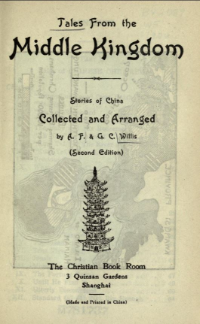 True disciples love Jesus more than even their own lives
In the river near Canton, there are people who live alongside their entire families on boats. And as can be imagined, their state of living is deplorable, but yet, there are missionaries who have chosen to live like these people, just so they can reach the idol worshipping peasants with the good news of salvation.
Killed for the sake of Christ
Mr. and Mrs. Zing and their son, aptly nicknamed "Precious Jewel", paid the ultimate price for their faith in Jesus. Theirs was courage in the face of fear and a certainty about their fate even as they faced death.
As we serve Him, the Lord will be our defense
Willis shares a very brief but utterly profound conversation between two missionary children on the power of God to keep his children safe from danger.
The Good Shepherd lays down His life for even one sheep
A grandmother who for so long had refused to accept the gospel finally does so after the death of her grandson. No longer was she sad for the great comforter was now her Lord and Savior!
Believers refuse to deny Jesus Christ
However hard his persecutors tried, Wong refused to deny his Lord and bow to an idol. Even after he thrown into the river to drown, his first words upon regaining consciousness after being saved from the water was, “You say, idol; but I say, Lord Jesus.”
There is salvation in no other nameThe blood of Jesus cleanses us from all sin
A dying wealthy man was led to Christ by the young boy attending to him and from total despair, the rich man received life, both in his body and in his soul. Today, both men are serving the Lord in different ways!
Deliverance from enemies and circumstances
A poor woman was out to fetch firewood in the mountains when she got suddenly attacked by a tiger. In her moment of trouble, she remembered to cry out to Jesus Christ and was miraculously delivered from death!
God using an audible voice to communicate
For various reasons, Mrs. Koo was unwilling to heed to the instruction to go out and preach the gospel, even after she lost her job. But after one night's experience, she was ready to obey the Lord and has done so ever since.
Love your enemies and pray for themDemonstration of who is our neighborDo not resist an evil personDo good to those who hate you
A Chinese Christian farmer demonstrates love toward a bandit who robbed him of all his possessions. Living out Matthew 5:44 through an amazing variation of the Parable of the Good Samaritan, the farmer won the bandit to Christ.