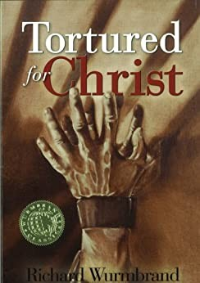 Sermon on the Mount
A Russian man is brought to Christ after listening to Richard Wurmbrand read the Sermon on the Mount, the passion and crucifixion of Christ, and then the resurrection. He expressed great joy and prayed with delight a simple prayer of repentance.
Become all things to all people
The Holy Spirit worked through Richard Wurmbrand and his wife to translate the gospel into “Marxist language” for a Russian officer with a lady officer who visited their home. Over a meal, they discussed Christianity and provided answers to their questions. The captain and the lady officer were won to Christ that day.
Natural human response to the wonder of creation
Richard Wurmbrand met a Russian couple who worshipped a "Nobody," a comparison to when the Apostle Paul met those who worshipped an unknown god. Richard led the couple to the full experience of salvation and redemption.
Jesus commands His disciples to go and make more disciples
Richard Wurmbrand walked up to a Russian lady officer to talk to her about Jesus Christ and invites her to their home, where he led her to the Messiah after listening to her astonishing story.
Jesus does not force Himself on people, He lets them choose
In conversation with Piotr about how he came to Christ, Richard Wurmbrand is surprised to learn that for Piotr, it was the stark contrast between Communism's forceful indoctrination and Jesus's subtle "knock at the door of our hearts".
The Word of God discerns the thoughts and intentions of the heartJohn the Baptist confronted even rulers
Two daring Christians pushed their way through to the prime minister of Romania, Gheorghiu Dej, to whom they boldly declared the Word of God. Though they were imprisoned for their daring witness, their words had sown seeds that would later bear fruit in the heart of Gheorghiu Dej.
Governments opposed to the Gospel
The Romanian church was hard-pressed on every side; from kidnap, to imprisonment, to heartbreaking lies by State officials to their loved ones and unspeakable tortures. From the clergy to the laity, and even children; no one was spared from persecution by the government.
Believers will suffer terrible things for the sake of Jesus' name
Alexander, a fourteen year old boy, paid the ultimate price, preferring that to having his father betray their brethren to spare his life.
Authorities forbid speaking to people about Jesus
After over 8 years of torture and imprisonment, Richard Wurmbrand was released and warned to never again preach or engage in any religious activity. But Richard will rather obey his Master - so he defied the authorities; damned the consequences, and continued to witness Jesus Christ to the underground church in Romania.
Counted worthy of suffering disgrace for the Name
On her wedding day, of all days, a young Christian girl is arrested by the Communist police for evangelizing and teaching children about Christ. But while everyone else wept, rejoicingly, she kissed her chains, and thanked God for counting her worthy to suffer for His Name.
Beaten for preaching the Gospel
In Communist Romania, severe beating was the reward for preaching the gospel. But instead of backing down because of this, Richard Wurmbrand, alongside other believers, resolved to continue preaching, saying to themselves: we preach and they beat; and everyone is happy.
Speaking the truth in boldness to persecutors
In a scene much like the death of Stephen in the Book of Acts, a member of the Romanian Central Committee of the Communist Party heard an unexpected speech from a Christian being tortured to death, which eventually led the official to faith.
Love your enemies and pray for them
A young Christian prisoner, sick with tuberculosis, was asked to betray his fellow prisoners in exchange for life-saving medicine. He refused to betray his friends. Then he was tempted to betray those prisoners who had done evil against him. Again he refused saying that Jesus commanded us to love even our enemies.
Father forgive them, for they know not what they doConversions among the opposing authorities
A Christian man that was sentenced to death expressed love for his persecutors and hope that he will see his wife in heaven. The officer on duty heard this conversation and later became a Christian.
Apostles sang hymns to God while in prison
Richard Wurmbrand reflects on his years in prison, and how the believers would joyfully sing even though they were beaten for it.
Speaking the truth in boldness to persecutors
While in prison, Richard Wurmbrand was asked by one of his captors, “How long will you continue to keep your stupid religion? Boldly, he made a defence for his faith, giving reasons as to why he will rather remain a Christian.
Willing to die for faith in Christ
When a Russian Army Captain threatened a minister with death, the minister stood his ground insisting that "Our Lord is really and truly the Son of God". The Captain was moved by the minister's willingness to die for the cross of Christ, he declared with tears "Now I too can die for Christ. You have shown me how.”