Pastor Hsi (of North China), One of China’s Christians 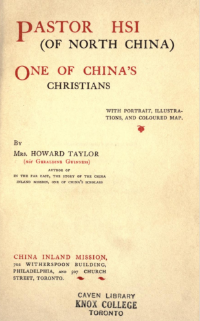 Salvation transforms
When Christian missionaries first arrived North China, Hsi, a prominent Confucianist, was not one of those expected to be 'foolish' enough to fall prey. But Hsi was in fact the first to have his opium-ridden life; totally transformed when he accepted the Lord Jesus Christ into his life.
Be reconciled to your brother before going to the altar
After Pastor Hsi became a follower of Jesus, he overcame great difficulty to be reconciled to his estranged relatives.
Demons cast out in Jesus' name
Mrs. Hsi was suffering from demonic oppression. The neighbors made fun of her situation, claiming that Christianity was a religion that brought evil spirits. After remedies had been tried and failed, Mr. Hsi decided to fast and pray for three days. On the last day, he laid his hands upon her and commanded the evil spirits to depart in the name of Jesus. She was delivered immediately. Thereafter, she became a Christian and the testimony strengthened her husband and brought new converts to the faith.
Not for the approval of men
Fan, an enthusiastic man was introduced to Christianity through a pamphlet. He traveled to another village to listen to missionaries inform him further about the Christian faith, he got much more; he saw them live the Christian life and excitedly talk about eternal life and other Christian principles. He gave his life to Christ after spending some time with them declaring "Our Heavenly Father is the true and living God, and Jesus the only Saviour.” Best of all, he discovered Christianity, unlike other religions was free!
Believers are the aroma of Christ to those around them
Liu, a noted gambler and opium-smoker undergoing rehabilitation is astonished at the joy and love that marked the life of the Christians who cared for him. They were poor; yet content, not drunk with wine; yet always cheerful.
Take the gospel to the ends of the earth
Mrs. Han is frustrated by her helplessness and inability to obey to the letter; Jesus' command to preach the gospel to the ends of the earth. But she soon learns that whatever little thing she could do for Jesus out of love; mattered immensely.
Demons cast out in Jesus' name
An addicted smoker, Chang's life was transformed when he had an encounter with the Saviour. However, his troubles were not over, his wife was seen throughout as a demoniac. All that changed when Pastor Hsi prayed for her and laid his hands on her, she was fully delivered. Both husband and wife went on to become powerful tools in the hands of God.
Prayer of faith for the sick
A testimony about the fervent prayer life of Mr. Hsi.
Jesus taught with authority
The Rev. J.W Stevenson testifies of the power and authority with which Pastor Hsi preached the gospel in Northern China, commanding the attention of Christians as well as the heathens.
Strengthening and encouraging new disciples
Pastor Hsi travelled long hours over mountainous roads from Hung-tung to Hoh-chau, to encourage the dispirited young missionaries who were abandoned when the Refuge home for opium-smokers got closed. By ministering strength to them, his faith also, was strengthened.
God uses even the common and uneducated
Li was "simple, homely, uneducated; but a man of real faith and spiritual power." Though unable to even read, he was a vessel used for honour by God - he left his old trade to become a "fisher of men".