The Insanity of God 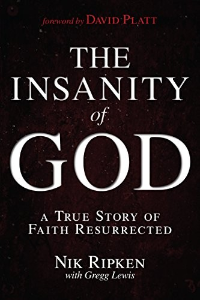 You are the salt of the earth
Nik Ripken and his co-labourers make a bold and conscious decision to be "salt and light" in Somalia; a region where abnormalities had become normal. And for over six years, they did that!
Apostles sang hymns to God while in prison
Dmitri, a prisoner in Russia, had a daily morning habit of singing a song to Jesus and writing down Scripture and songs. He was punished each day for this by the prison guards. Finally they intended to execute him for his disobedience, but the entire prison sang Dmitri's song, striking fear into the guards such that they gave up their plan.
God will provide for our daily needs
One wintry night, an imprisoned pastor's family had run out of food supply and so prayed to God for provision before retiring to bed still hungry. That same night, from 30Km away, the Lord sent this family the much needed provision they had prayed for.
Holy Spirit guides with specific names or details
In response to the dire need of a family, the Holy Spirit wakes a deacon in the middle of the night and expressly communicates the need of this family to him, directing him to head out and meet this need. While he hesitated, the Holy Spirit remained firm until he obeyed and brought succor to this needy family.
Governments opposed to the Gospel
While in prison, Kostyantyn, a Ukrainian Christian incarcerated for his faith, witnessed the great suffering and eventual death many Church leaders in his country suffered for refusing to deny Jesus. Their courage even while suffering, gave him strength to gallantly carry his own cross.
Speaking the truth in boldness to persecutors
Stoyan's mother is caught by a jailer when she tried to smuggle a Bible to her husband at the torture facility he was being held. For this, she was threatened by the prison commander who boasted of the applause killing her entire family will bring him. But confidently, Stoyan's mum replied him, ". . . nothing you can do will separate us from the love that is in Jesus Christ!”
Holy Spirit guides with specific names or details
While Stoyan's father was imprisoned, the government exiled his wife and four children to an unknown place. On the train to exile, a stranger walks up to them; his Church was praying the previous night when the Holy Spirit specifically directed them to be on that train that day; with an offering for them.
Believers pray for the release of the imprisoned
An imprisoned pastor is tied to the stake and made an offer to deny Christ and be set free, or face execution. He turned down the offer, but instead of getting executed; that same day, ten years since his incarceration; he gets released. He got home and found his family and other believers, praying for him at the alter in church.
Forgiving your persecutor
A few months after his release from prison, a Pastor is called upon to pray for a blind and diabetic man, on getting there, he is shocked to discover that the sick man was one of his fiercest tormentors in prison. “Oh, Lord! Do not let me fail you now!” - he prayed, and God heard him; for he found the grace to forgive his persecutor.
God using an audible voice to communicateHoly Spirit guides with specific names or details
Pramana's life was in ruin; he was not in loving terms with his wife or kids and even his crops and livestock were yielding nothing. One night he heard a voice tell him to "Find Jesus, find the gospel," with detailed instructions on where and how to find Him. The very next day, Pramana embarked on the journey that forever changed his life!
Holy Spirit guides with specific names or details
Dr. Ripken's host makes a sudden detour on their way to the airport so they could go talk to a church leader - if he was home. On arriving at his home, they were amazed to discover that their guest was ready with breakfast, for he had been expecting them after he was informed of their coming by the Holy Spirit.
Holy Spirit guides with specific names or details
When Nik Ripken reluctantly travels to a certain country, he is met at the airport by five strange men. It turns out that these men had been praying and we're directed by the Holy Spirit to him in very clear terms.
God communicating in a dream
Nik Ripken shares the remarkable conversion story of five men, who were all prompted to seeking Christ through the strange dreams they each had.
Salvation transformsBeliever as former persecutor of the church
When a ex Jihadist finds Jesus Christ after a series of terrible dreams that reminded him of his evil past, he not only was free from the guilt of his past, but now like Paul, became a fearless worker for the gospel of Christ.
Jesus reveals Himself to an unbeliever
A Muslim fighter, who had killed countless men both personally and in battle, began to have dreams that his hands were covered in blood. No matter what he did, he could not wash the blood off. But one night the dream changed. Jesus appeared and told the fighter that only He could wash the blood off.
Escape from pursuers
When a Muslim-Militia soldier who found Christ and forsook Islam was caught by the killer squad he used to lead; death by beating was all they planned for him. But as they began to beat him, he was able to escape in the most unlikely, yet amazing way.