I Stand With Christ 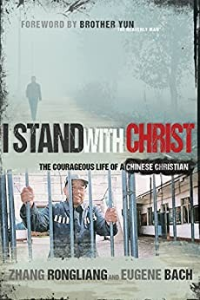 Killed for the sake of Christ
Zhang's grandfather, Sun, suffered great humiliation and public disgrace for the Name of Christ. "Like a helpless lamb among wolves", he was not only taunted for his faith but eventually martyred for it.
There is healing in the name of Jesus
Two terribly ill believers were determined to obey the Lord in baptism, risking their already fragile bodies in the process. The result of this obedience for both of them was total healing from their infirmities.
Disciples are devoted to Christ above anything or anyoneWe must obey God rather than men
Zhang Rongliang, a member of the Chinese Communist Party, was arrested for attending a Christian meeting. Although he was offered freedom if he would deny Christ, he prayed and received the grace and courage to stand for Christ. In the face of inevitable suffering, he experienced the joy that comes from doing the right thing.
Governments opposed to the Gospel
Christians in Zhang's village took turns to read his Bible and guarded it with their all. When Zhang got arrested, a search party was sent to his home by the local government to find his Bible. Fellow believers in his village also got detained.
Believers need fellowship to grow
While in prison, Zhang Rongliang, Li and other Christian brothers met secretly in the crude bathrooms in camp to encourage each other. Though the bathrooms were filthy, the fellowship they enjoyed in Christ, was a sweet aroma to their souls.
Believers pray for the release of the imprisoned
On the night Zhang Rongliang was released from prison - where for years, he suffered terribly for his faith in Christ Jesus; he went straight Brother Li's house. On getting there, he found the brethren gathered and praying for his release - God had heard them; for there he was, in their midst again.
God communicating in a dream
One day in a dream, Zhang Rongliang who was in prsiosn and enduring much suffering heard a voice tell him, "today, the man who persecuted you will die.” The very next day, Zhang's dream came to pass.
Counted worthy of suffering disgrace for the Name
When Christians in Fangcheng were forced into hard and free labour for the government, Zhang Rongliang was not happy that he was not included to join the common suffering for Christ. But an "opportunity" to suffer for Christ came Zhang's way soon , and he leaped for joy, rejoicing that he had been at last counted worthy to suffer for Christ.
Blessed are those who hunger and thirst for righteousness
When an opportunity came for Zhang to satisfy his spiritual hunger, he endured much risk and starved himself, just so his hunger for the word could be filled.
Believers refuse to deny Jesus Christ
When some believers were sent to prison for "reeducation", they were subjected to extreme cruelty in an attempt to break them and have them deny Jesus. And while some did, for Zhang Rongliang and three others, Jesus was all they had. Denying the One who will never deny them was not an option.
Believers are the aroma of Christ to those around them
Lanju Gao was a Muslim sent to the Chinese government's atheist indoctrination camp, but instead of becoming atheist, Lanju became a Christian. And when tortured because of his conversion, Lanju held his ground; for he had seen Zhang suffer and yet not deny this Christ - he too rejoiced that he now served the one true God.
Believers are the aroma of Christ to those around them
In a time of serious food scarcity when other prisoners were fighting over food and stealing each other's ration, Brothers Chen and Zhang freely prayed and shared their food together, to the utter shock of everyone. Their shining example was all Lui and Wang needed to come to Christ.
Ask, and it shall be given to you
Zhang Rongliang's Bible - a serious contraband and other documents are discovered in prison. He prays to God, asking that: "this storm be immediately calmed", and in the most unbelievable way, he recovers everything that was taken.
Love your enemies and do good to them
Wubo and Zhang had a long history of family enmity. When Zhang came out from prison, Wubo expected that Zhang will avenge all the evils Wubo had done to him in his absence. That did not happen, rather Zhang visited Wubo with gifts and shared with him the message of the love of Christ and how it led him to love his supposed enemies. Wubo accepted the Lord that day and they both became brothers in the Lord.
Blessed are those who are persecuted
Zhang Rongliang rejoices that he is in prison for the name of Jesus.
Apostles sang hymns to God while in prison
Zhang Rongliang, along with several other pastors, was sentenced to three years hard labor. But they rejoiced greatly because they were imprisoned together, which caused them to sing and shout praises to the Lord.