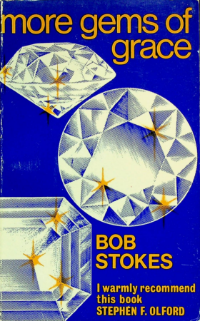 God using circumstances and timing to communicate
When the Lord was to call Bob Stokes to India for missionary service, He arranged a series of events, circumstances and at a timing that made it obvious He was calling Bob to the country. And as Bob shut himself to seek God's will through Bible Study and prayers, he got the needed confirmation.
Be reconciled to your brother before going to the altar
Bob Stokes prayed for help to openly ask forgiveness for a momentary flash of sinful anger against a brother. The result of obedience was electrifying.
Preach the word, in season and out of season
Bob Stokes knew to preach the gospel at all times; in season and out of season! And while on a train one day, he grabbed with both hands, a most divine opportunity to share the gospel with two soldiers, who in answer to his prayers, came to join him in his compartment midway through their journey.
Reasoning with people in public places
While on a train to Calcutta, a Brahmin Hindu publicly challenged Bob Stokes about the claims of Christianity. And taking the opportunity thus presented him, Bob brilliantly responded to this fellow before taking the time to witness about Jesus to an attentive audience!
Deliverance from enemies and circumstances
Just after parking his car, it gave a sudden lurch and fell to one side. Bob, who knew what could have happened, if this occured just a few minutes before then, was left thanking God for delivering him.
Peaceful resignation to the will of God
Con, who though a professing Christian for a long time, wondered why she didn't have the joy that two young believes were having. It turns out, her personal ambition was what stood in the way and until she at last surrendered to God's will, that joy eluded her.
If we have food and clothing, with these we will be content
When some British officers got lost in the area of Pedapalli, and found the Stokes living there, they could not believe it for there were so many basic necessities that they had no access to. But for the missionary couple, Godliness with contentment was great gain, because regardless of their situation; they were happy!
God provides exactly what is needed
Pauline had faith that the balance needed to complete her transport fare to Fiji would be provided and she communicated same to the traveling agent. And just like she believed, it was done unto her, for the exact sum she needed was provided by the Lord through a friend who knew nothing about her need.