Goforths of China Through Deep Waters to Higher Ground 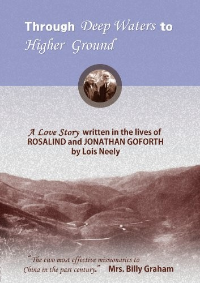 Christians share in the suffering of Christ
Through personal tragedies; the loss of four children, blindness, deafness and several close shaves with death, the Goforths, having put their hands on the plow, committed their lives to the service of God.
Don't be anxious for what to eat or wear
Rosalind's mother, a God-fearing woman, trained her children in the ways of the Lord teaching them to pray over everything. Rosalind learned to trust God for every need, large and small.
God's work will not lack God's supply
Jonathan and Rosalind were totally exhausted and needed an extra hand to help with the work of God. The unlikelihood of getting any help notwithstanding, they took to prayer; claiming the promise of God to; "supply all our needs". The very next day, God honoured His promise in answer to their prayer.
According to your faith be it done to you
Jonathan Goforth refused to take any medication, despite being critically ill; choosing to 'trust in God' only. But after yielding at last to his wife's persistent urging of him to take medication, he learns the very vital lesson of balancing his faith in God for healing with the need to also see a physician as God's own minister.
God uses even the common and uneducated
Jonathan Goforth, a trained theologian, skilled expositor and experienced preacher found his greatest gift in training simple uneducated men to share the message of Christ with confidence and power.
Be reconciled to your brother before going to the altar
Jonathan Goforth is convicted by the Holy Spirit to go and resolve a disagreement with a fellow missionary. He refuses for several days until one day in the middle of a sermon, he obeys the Holy Spirit, and instantly the audience changed, experiencing an extraordinary weeping and public repentance.
Transforming power of forgiveness
The families of slain believers in Shinminfu had made a list, vowing to exact revenge for their loss. But as soon as they found grace from God to forgive, that list was "torn to bits and the fragments trampled underfoot".
Holy Spirit convicts people of their sinHoly Spirit renewal for the repentant
Missionaries in Changtefu joined together for a special prayer with great expectation. God answered, poured the blessing of His Spirit upon them and several confessions were recorded. The most astonishing of all was that of a pastor who confessed that he never believed in the previous revival meetings organized by Jonathan Goforth, but now had himself been moved by the Spirit to repentance.
Lay down one's life for another
A Chinese Christian soldier gives up his life for his fellow soldier, displaying a love that made the fellow officer cry.
God answers prayer
When Rosalind faced a financial need, she considered it "another opportunity to see what God can do" believing that He was a friend. Right before she finished the prayer, God answered her request, and the need was provided for!
God's work will not lack God's supply
The home church of Jonathan Goforth decided they would not be sending any more missionary recruits. Although disappointed, Goforth prayed and believed that God will provide the workers needed for his work and the provision needed. Indeed, God provided both and the work expanded to a new level. This demonstrates God's work done God's way would never lack supply.
According to your faith be it done to you
When a nurse forgot to use the dark shield ordered by the doctor to cover Rosalind's eye while dressing it post-surgery, Rosalind's eyes became inflamed and painful that night. Realizing only God could help her, she turned turned to Him for help and surrendered to His will for her; for blindness or for sight and that very moment became completely healed.