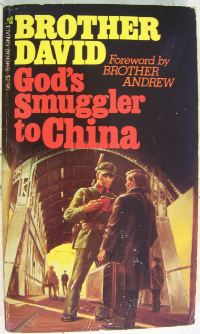 God blinds the eyes of adversaries
Brother David, taking Bibles into China, prayed the same prayer as Brother Andrew had prayed when taking Bibles into Communist Europe, "Lord, make seeing eyes blind."
God blinds the eyes of adversaries
John, a Chinese student believer, had complete peace that God would hide his Bibles from the authorities, even though they were simply stored under his dorm room bed, a room he shared with others.
Do good to those who hate you
Even though Mrs. Kwang was harshly treated and imprisoned in awful conditions, she asked Jesus how she could still tell others about Him, so she voluntarily became a cleaner for the prison, many heard the Gospel and were saved.
God blinds the eyes of adversaries
The Chinese police were searching Daniel's home for information about the location of his mother, who was recently released from prison. As they lifted a pillow in which letters were hidden, Daniel prayed that the Lord would blind their eyes. God answered his prayer, and in a comical way.