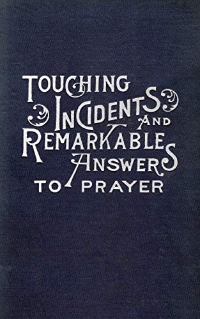 Disciples must keep their word
Seventeen-year-old Charlie Coulson vowed to not take any anesthetic before surgery, choosing to trust fully in the Lord. And he did just that. His remarkable loyalty and prayer while on his sick bed, nearly ten years after his death, led his unbelieving physician to Christ.
There is healing in the name of Jesus
In 1870, James H. Blackman's wife was diagnosed with "Bright's disease of the kidney" - an incurable ailment. But holding onto Christ's promise; James, his wife and daughter, petitioned God to heal her. And on February 25, 1873, the medically impossible, miraculously became possible.
There is healing in the name of Jesus
Mrs Susan Miller had been afflicted with rheumatism since childhood. Despite the monies spent seeking relief, nothing changed. But turning to God, she found instant and total healing; when Mrs. Griffin anointed and prayed for her.
God answers prayer
Marcus Aurelius, Emperor of Rome and his men were surrounded by their enemies in Germany, and for five days, they suffered thirst and hunger. He prayed to his gods to no avail, but an astonishing miracle took place when he beckoned on the Christians in his battalion to pray to their God.
Don't be anxious for what to eat or wear
In the midst of a fierce snow-storm, John Barry; an old charcoal-burner and his wife ran out of food supply. Instead of giving in to despair, they got on their knees and prayed to the One who alone could help them. The Lord heard them and sent them help from ten miles away.
God answers prayer
In a very remarkable answer to prayer, a drunk mob, determined to permanently obstruct a camp meeting of believers was not only quietened but had many that were part of it, led to repentance.
There is healing in the name of Jesus
Brother W.B Bailey and his wife suffered from different infirmities; while he dealt with cancer in his left breast, his wife had a paralysing pain that shrunk her left arm. Both of them found total healing in answer to prayers by the saints.
God answers prayer
A twelve year old, upon hearing the verse of scripture, "all things whatsoever ye shall ask in prayer, believing, ye shall receive", began to pray fervently for her father and was answered instantly.
According to your faith be it done to you
In a display of faith, a four-year-old girl took the telephone and called the post assuming it was Jesus. She had just one request- “Our baby is sick, and we want you to let it get well. Won’t you now?” The request was granted.
God answers prayer
Mrs. Miller had been invalid for many years, she was unable to move without crutches until when she came to the belief that Jesus would heal her. She prayed for healing and God answered. She never experienced any pain again.
God answers prayerSpiritual burden for a lost people group to be saved
A woman who was bedridden for several years was used by God to save the lives of hundreds of people who were in a train that was fast approaching a collapsed bridge.
God answers prayer
A woman whose supply was exhausted prayed to the Lord, depending solely on Him to provide for her. In answer to her prayer, God impressed on a man who had just returned from a funeral to visit her, which he did and provided the funds needed just at the right time.
God answers prayer
Mr Moody and others who were on the disabled steamer spree, believe that the vessel was saved in answer to prayer.
Ask Me anything in My name
By fervent prayer to God, Mrs. Van Cott made the two hundred converts she had seen in the spirit at the beginning of the revival she held in Stone Ridge.
God communicating in a dream
John Newton, a certain German and John Hardock were all unbelievers heading for perdition until they all had different strange dreams that changed the course of their lives forever.
There is no sting in death for the believer
Thirteen-year-old Effie and nine-year-old Vetta were sick with diphtheria, but since they had given their hearts to Jesus, they had no fear at the prospect of death. Joyfully they embraced their fate as each one saw Jesus and what was to come.
God communicating during prayer
An old saint with his four sons trusts in the Lord's instruction to suspend their journey until the next day against their usual routine. The route they were supposed to take was attacked in the night.
I am sending you out like sheep among wolves
A crowd gathered to beat and lynch a congregation. Although helpless and without any tool for self-defense, the brethren knelt in prayer, raising their voices to God as their only hope. The crowd dispersed on its own without attacking the congregation.
According to your faith be it done to youSigns and wonders draw attention to Gospel message
To the disappointment of his family and the Hindu priests, a man commits to renounce idolatry if Jesus heals his dying wife. Upon her healing, he went round his village declaring, “Jesus Christ, He is the only true God!”