I Dared to Call Him Father 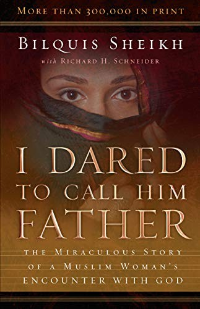 Jesus reveals Himself to an unbeliever
Bilquis Sheikh, a wealthy and politically influential Pakistani woman, had a dream about dining with Jesus. Later, while she read the Bible, she encountered Jesus describing the very scene from her dream. She decided to follow Him no matter the cost.
Transforming power of forgiveness
By exchanging her heavy burden for Christ's light burden, Bilquis found grace to do what she felt was impossible: forgiving Khalid, her ex husband who she resented for the hurt he caused her.
God using a vision to communicate
Bilquis listened to the voice of the Lord to undergo baptism by water even though she knew she would loose so much.
Holy Spirit convicts people of their sin
Bilquis Sheikh lied at a relative's funeral she attended and by so doing, grieved the Holy Spirit and thus lost His comforting Presence. Only by repenting did the warmth of His Presence return to her.
True disciples obey the teachings of Jesus
Bilquis was frustrated that all her efforts at sharing the gospel with friends and family yielded no results. But in her frustration the Lord spoke to her, encouraging her to focus instead on seeking His presence and obeying Him and not just on results.