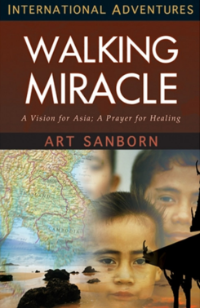 There is healing in the name of Jesus
Art Sanborn was about rushing his toddler David, who had just tumbled headfirst down a steep stairway and became unconscious to the hospital, but David's brother protested, asking that they pray to Jesus instead. When 4 year old Sean prayed for his little brother, an astonishing miracle occured.
Holy Spirit renewal for the repentant
By confessing to each other the secret sins they were both battling, Art and Ellen Sanborn wept in heartbroken repentance and were able to finally experience the victorious Christian life of freedom and great joy.
Salvation transformsA sin no better or worse than another
Brian, a transexual who had come to believe in Jesus, inundated Art Sanborn with many questions as he wondered if Jesus would accept him given his history. Art took the time to lovingly dispel Brian's fear; assuring him that while Jesus hates sin, he completely loves the sinner.
God answers prayer
John's perpetual drunkenness led to his separation from his wife and daughter. After seven years of addiction, John had become a Christian and wanted to reunite with his family, whose whereabouts were unknown. But after Art Sanborn prayed with John, the unlikely happened.
Ask Me anything in My name
The Sanborns, with their kids were all terribly exhausted as they hiked down a mountain. Fearing that the kids may suffer a heatstroke and dehydration, Art called for prayers and they gathered to seek God's help. Just after their prayers, help, unlikely as it was, appeared at the scene.
Religious zealots opposed to the Gospel
Art Sanborn and his team were in Samerng to evangelize and went about their mission peacefully and were getting results. But soon, a Buddhist zealot, afraid of losing his relevance to these group of believers organized a gang of teenagers to violently oppose the good work of God's people.
God using circumstances and timing to communicateJesus has authority over demons and evil spirits
Violent opposition to their work in Samerng had forced Art and his team to leave the town. But before leaving, they gathered to ask, "Lord, where should we go?" And before they were done praying, God had answered their prayer!
God's work will not lack God's supply
Art Sanborn desperately needed a mountain motorbike to rent so he could join his team in the Mae Hong Son province to share the gospel. But every effort of his at securing a bike that morning was fruitless until he committed it to God in prayer and the Lord supplied this need in a most amazing way!
Deliverance from enemies and circumstances
On his way to the Mae Hong Son province for evangelism, Mr. Sanborn was accosted by a gang of heavily armed men who dealt in drugs and wanted to rob him. But when he told them he was not alone but with many (angels), his assailants froze in fear allowing him to successfully escape.
God bestows gifts and healing through the laying on of hands
The pathetic condition of a young malnourished boy only worsened when his father dabbled into spiritism in a desperate bid to restore his health, as the boy lost his ability to speak; and remained mute for six weeks. But when Tuwee, a previously shy believer, laid hands on him and led other believers in prayers, this young boy miraculously regained his ability to speak.
The righteous innately have God's heart toward those in need
When Art Sanborn and his team went evangelizing in Baan Lankum, they found a terribly emaciated boy, suffering from malnutrition, they not only prayed for this boy but took him to the hospital, had him treated and fed him until the doctors declared him healthy enough to return home. After a month, an excited boy; now full of life, was reunited with his grateful parents.
Demons cast out in Jesus' name
A heavily possessed man is delivered from the satanic possession, when Art Sanborn and a team member of his united and invoked the all powerful name of Jesus.
God multiplied a small amount of food
The Sanborns took in a very large, last-minute outreach team that did not have a sufficient budget for their needs. Art was optimistic, while Ellen was discouraged. But this was God's plan, and He proved it by feeding the whole team from bottomless pots of food.
God answers prayer
Art Sanborn and his team determined to be on the offensive spiritually, they prayed every day for their neighborhood believe that God would turn "garbage around us into fertilizer; then He could breathe life into a beautiful garden of precious souls". Over the next few years the neighbourhood was transformed so much that bars closed down, squatters got jobs and the Muslim mosque was closed down.
God's work will not lack God's supply
The Sanborn's had their plane tickets stolen. They only had $300, and needed an additional $600 for new tickets. But God commanded them to give that $300 to another needy family. After a little hesitation and more prayers, they obeyed God. The very next day, a total stranger sent them the largest individual donation they had ever received.
God answers prayer
Unable to afford a computer set for their kids who were all in high school, Art and Ellen were in need of a miracle and took to praying to God for a computer for their children. The Lord revealed to their friends - the Nakatsukasa's, their need for a computer and used them to miraculously provide the needed funds.
Signs and wonders draw attention to Gospel message
When no one will listen to Rob and his team share the gospel at a train station in Kuala Lumpur, the team resorted to singing and praising God. A pretty astounding thing happened when they uniformly began to shout: "Jesus Reigns" - it suddenly commanded the attention of many to the Gospel they were proclaiming.